The magnificent UNESCO World Heritage Site just off the coast of County Kerry is recognisable by Star Wars fans worldwide.

Ireland’s mythical Skellig Michael has been named among the most beautiful movie locations in the world.

Featuring in Star Wars: The Force Awakens and The Last Jedi, the unusual historic site has become one of Ireland’s most popular tourist attractions.

Global travel website Big 7 Travel has named the incredible Skellig Michael among the most beautiful movie locations in the world. We have to say; it’s not hard to see why!

Ranking the island at number 38 on their list of ‘50 Most Beautiful Movie Locations In The World’, Big 7 Travel commented on the site’s beauty.

They wrote, “Set on the remote island of Skellig in County Kerry, Skellig Micheal plays the role of other-worldly Ahch–To.

“The location first features in The Force Awakens, but it then plays a huge role in the latest instalment, as Luke Skywalker trains Rey.

“Despite its remote location, there’s been a huge surge in Star Wars-related film tourism. Thousands of aspiring Jedis make a pilgrimage to the Wailing Woman rock every year.”

A must-visit in the Kingdom County – a mind-blowing experience

As one of the most beautiful movie locations in the world, a trip to Skellig Michael is sure to be an experience to remember – even if you’re not a Star Wars fan.

The larger of the two Skellig Islands, Skellig Michael, was home to monks in the sixth century.

Driving the Skellig Ring is a much quieter alternative to the popular Ring of Kerry tourist trail. However, it certainly doesn’t skimp on sights to see.

Only 180 people per day are allowed to set foot on this remote and rocky island. So, you must book tickets well in advance.

With incredible views, ancient monasteries, craggy caves, and lots of wildlife, there is plenty to explore.

So, while you may not have yet visited Skellig Michael, as one of the most beautiful movie locations in the world, you’re sure to recognise it from the big screen.

Other spots you may have seen on film are the stunning Angkor Thom in Cambodia. Ranking number one, this historic temple may be familiar to Lara Croft fans.

Salzburg in Austria, which acted as the backdrop to the iconic 1965 musical The Sound of Music, came in second.

The gorgeous Greek island of Skiathos from the ABBA-themed musical Mamma Mia came in third.

Other magical locations that made the top ten include Petra in Jordan and Savoca in Italy. Coming in sixth and seventh are Matamata in New Zealand and Maya Bay in Thailand. 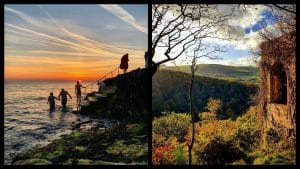 24 hours in Greystones: a perfect one-day itinerary for this beautiful town

Taylor Swift visits Donegal to celebrate one year of Folklore