Brush up on your Irish history trivia with our compilation of 32 events—the biggest historical event from every county in Ireland.

Ireland may be a small island, but it has undergone a tumultuous and tempestuous history, with a story or tale to be told from each of her 32 counties.

Ready to brush up on your Irish history trivia? Here is the biggest historical event from every county in Ireland.

The Good Friday Agreement was signed in Belfast in April 1998, which signalled an end to the conflict in the North and the beginning of peace.

600 United Irishmen were massacred in Carlow during the 1798 rebellion and buried in a pit referred to as the “Croppies Grave.”

Cavan Town became the first Ulster town under the Plantation Scheme to be incorporated and received its Charter in 1610.

Daniel O’Connell, known as “The Liberator,” was elected to Westminster in 1828, where he pushed for Catholic emancipation.

Michael Collins was shot dead at Beal Na Blath, Cork, on 22 August 1922. He was the leader of the Provisional Government and a signatory to the treaty that had divided the country.

On 30 January 1972, the British Army’s Parachute Regiment shot and killed fourteen innocent civilians on the streets of Derry during a civil rights march, in what became known as “Bloody Sunday.”

The founder of Irish Republicanism, Theobald Wolfe Tone, was captured in Lough Swilly, Donegal, after he organised a rebellion against British rule in Ireland in 1798.

Scottish settlers arrived at the port of Donaghadee to establish the Plantation of Ulster, a Protestant settlement in the North of Ireland. It preceded the arrival of 30,000 settlers to the province.

The Easter Rising took place in Dublin from the 24 to 30 April 1916. 15 leaders of the rebellion, including James Connolly and Padraig Pearse, were executed throughout May, which galvanised support for the establishment of an independent Irish Republic.

Seán South and Fergal O’Hanlon were killed in an IRA assault on RUC barracks in Brookeborough, County Fermanagh, on 1 January 1957.

The Battle of Aughrim was fought in Galway in 1691. It marked the end of Catholic Ireland and the beginning of the Protestant ascendancy in the country.

In the Dingle Massacre of June 1793, soldiers shot and killed 14 people who were agitating against the Tithe tax at the Mullins Estate in the town of Dingle.

Anglo-Normans, under Strongbow, took control of Kildare in the 1170s, depriving the native Gaelic clans of their land in the county.

The Statutes of Kilkenny were a series of 35 acts signed in Kilkenny in 1367 in an attempt to save the English colony in Ireland.

The county’s name was changed from “Queen’s County” to “Laois” in 1922 after the formation of the Irish Free State.

The Treaty of Limerick was signed on 3 October 1691, ending the Williamite War in Ireland.

A French expeditionary force during the 1798 Rebellion led by Humber were defeated outside the village of Ballinamuck on 8 September.

In August 1649, British military leader Oliver Cromwell marched upon the town of Drogheda in County Louth, where his troops indiscriminately massacred 3,500 people, a majority of the town’s population.

The word “boycott” originated in Mayo when landlord Charles Boycott was ostracised by his community during the Land War during the late 1800s.

The Battle of the Boyne was fought between King William of Orange and King James II on 1 July 1690, and took place in Oldbridge, County Meath.

Loyalist paramilitaries murdered 33 innocent people, including women and children, in what became known as the Dublin-Monaghan bombings of 17 May 1974.

Under British occupation, Offaly become known as ‘King’s County’ in 1547 in honour of King Phillip II of Spain.

25,000 Williamite troops besieged Athlone town in 1691, defeating the town in ten days before the signing of the Treaty of Limerick.

The cholera epidemic of 1832 caused more deaths in Sligo than anywhere else in Ireland, leaving people dead on the streets and wiping entire families.

21 January 1919 marked the first attack from Irish Volunteers on the RIC in the Irish War of Independence, where two RIC officers were killed in an ambush at Soloheadbeg.

Nicknamed as the O’Neill county, Tyrone witnessed Hugh O’Neill becoming the Earl of Tyrone in 1585. He became the “O’Néil,” the Chief of Tyrone.

On 17 October 1171, King Henry II became the first ever English king to set foot on Irish soil, when he landed at Waterford with 4,000 men, marking the beginning of British rule in Ireland.

Mullingar, the county town of Westmeath, was completely burned to the ground by the O’Neill clan in 1597.

In 1167, a small band of Anglo-Norman raiders landed in County Wexford. Within two years, the Norse ports of Wexford, Waterford, and Dublin had fallen to their control.

And there you have them—the biggest historical event from every county in Ireland! Our little island has been through a lot, but that’s all the more reason to appreciate it. 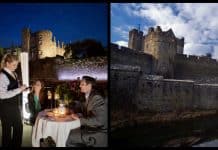