Nothing beats a good road trip! A boot full of snacks, your best buddy beside you and an awesome soundtrack is all you need for your next adventure. And where best to explore than the wonderful Kingdom of Kerry? A county so beautiful, even the cows are rare.

For a road trip with a difference, the Ring of Kerry is a stretch of stunning coastal views and pockets of mystical land.

It is a 120mile drive around the Inveragh Peninsula and although it can be done in a few hours it is advisable to take your time and stop along the way to make the most of this beautiful part of the world.

From gorgeous parks to pretty towns, there are lots of places to visit on the Ring of Kerry but here are 12 things we think you should definitely take time to see.

Just be sure to drive it clockwise to avoid getting stuck behind the tour buses taking the opposite route.

Talk about starting on a high! The Ring of Kerry begins in Killarney National Park and what a way to start. It takes you through some of the most breath-taking scenery in the country and will leave you in no doubt you have the chosen the best road for your trip.

There are lots of ways to explore the park in all its glory. From fantastic walks, most of which are nice and flat, to kayaking or canoeing against an awesome backdrop.

It is a haven to flora and fauna and home to the famous Lakes of Killarney so bring a camera and make some memories to treasure.

Killarney National Park was created in Ireland after Muckross Estate was donated to the Irish Free State in 1932.  It was the first national park on the Emerald Isle and Muckross House, built in 1843, was eventually opened to the public in the early 1960’s.

Sitting on 1,300 acres of splendid land it is a building steeped in history and natural beauty and well worth a visit. Access to the house is by guided tour only and the walled gardens and traditional farms are like stepping back in time.

Ladies View is another jewel in the crown that is Killarney National Park. During Queen Victoria’s royal visit here in 1861 it is said her ladies-in-waiting favoured the spot so much it was named in their honour.

It is one of the most photographed spots in Ireland and appears on thousands of Instagram pages every year. If a magical view is your thing then you have to stop at one of the viewing points along the ring of Kerry en route to Kenmare.

For those less taken with scenic valleys or moments for contemplation then there is a gift shop and café to kill some time while you wait for your (perhaps more sensitive) pal.

If waterfalls are more your thing then make time to visit Torc Waterfall before leaving Killarney National Park. It is only 2.5 Km from Muckross House and well signposted so it would be a shame to miss it.

A relatively steep climb up a set of steps gives the best view and the 20meter cascade will be strongest after rain. Torc Waterfall comes from the overflow of the Owengarriff River that drains from the Devil’s Punchbowl corrie lake at Mangerton Mountain.

If you were educated in Ireland it is likely you will have heard of MacGillycuddy’s Reeks and will know it as the country’s highest mountain range (if you were listening!) Well now is your chance to see them for yourself.

Moll’s Gap, on the way to Kenmare via the Ring of Kerry is a great place to catch a splendid glimpse of the famous ‘Black Stacks’. The spot is called after the owner of a small pub in the 1820s, Moll Kissane.

The original road was under construction at the time and she became well known for her homemade poitin … a tipple likely to only enhance the view!

Back on the road from Moll’s Gap will take you to the pretty town of Kenmare. Translated from Gaelic as ‘Head of the Sea’, Kenmare is bursting with activities for all ages.

From horse riding to golfing there really is something for everyone with at least one overnight stay recommended, especially if you want to enjoy a couple of pints with your dinner.

There are lots of fantastic places to eat and indeed sleep so it is worth planning ahead in high season.

A trip to Ireland wouldn’t be complete without catching a glimpse of at least one fairy and Sneem is the place to find them.

Home of ‘The Way the Fairies Went’ (also known as ‘The Pyramids’), it is a super stop off point to take a break from reality and embrace the magic of Ireland.

Known as ‘The Knot’ in The Ring of Kerry this quaint village is full of places to eat, rest and discover. Rated as one of Ireland’s Top 10 Tourism Towns Sneem is where mountains meet water in the Kingdom.

Calling all Star Wars fans! A trip to the Skellig Islands is no doubt top of your bucket list. The location for Star Wars: The Force Awakens and The Last Jedi, you can walk in the very same footsteps as Luke Skywalker.

And for nature lovers, Skellig Michael and its close neighbour Little Skellig is a haven for flora and fauna.

Home to a colony of Atlantic Puffins during the warmer months, it is a place of natural beauty, historical interest and Hollywood glamour.

There are many spots in Ireland (a lot of them are in Kerry) that resemble a little piece of heaven. And if you’re anything like me only one thing can make that spot even more perfect and that’s chocolate!

About 15 minutes off the Ring of Kerry, Skelligs Chocolate Factory is the perfect place to take a break from the world.

It has free tasting sessions every day, a great little café for a well-deserved treat and a playground to keep the children amused.

It is situated in a very remote location so is only open from Easter to September but the views of the Skelligs Rock are amazing and the chocolate is delectable.

Kerry is home to some of the most beautiful stretches of sand in Ireland and Rossbeigh beach is no exception. The sense of space on this blue-flag beach is perfect for the ultimate ‘get-away’ experience.

There is pony trekking, a children’s playground and water sports for the warmer months.

The closest village of Glenbeigh is lovely for some lunch and sits on the Ring of Kerry.

It is full of mystical charm and believed to be where Fianna legends, Oisin and Niamh, left the island on their white horse to live a life of eternal youth in the land of Tir na nOg under the sea.

Many people travel to Ireland for the castles so it is only right to mention the wonderful Ross Castle on the bank of Lough Leane.

It was first built by the O’Donoghue clan [family] in the 15th century but became occupied by the Brownes, the Earls of Kenmare, during the Second Desmond Rebellion in 1580.

O’Donoghue Mór [the chieftain who built the castle] is remembered for his wisdom and wealth. Irish folklore suggests he lies sleeping under the lake to this day but appears every seven years to grace his land with good fortune.

Anyone who sees him, the first morning of May, will live a prosperous life. And if you think you’ve already spotted him … he’s the gallant spirit appearing from beneath the water before circling the lake on a huge white horse.

If you are taking your Kerry road trip in the month of August, why not plan the entire holiday around a mountain goat?

The town of Killorglin will be your final destination if you drive the ring road clockwise and during one weekend in August (10 – 12 this year) the locals gather for a truly special occasion.

After carefully selecting a mountain goat, they take him into the town, crown him King of Ireland and spend the next three days worshipping him with a weekend of song, dance and drink.

Believed to be the oldest festival in Ireland and dating back to Pagan times, Puck Fair is the perfect way to end your time in the Kingdom of Kerry. 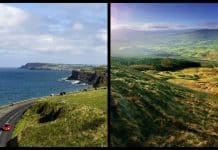 Top 5 of the most dangerous roads in Northern Ireland 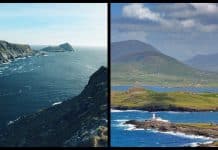 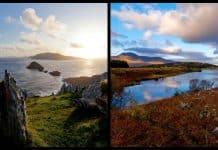 10 things to do in Kerry on a budget