Stand on the edge of a sea-cliff or stop off at a scenic coastal town. Here are the best things you can do on your trip to Donegal.

Donegal is one of the most unique counties in Ireland. It is planted in the north-western corner of the country and is the fourth-largest county by area in all of the Emerald Isle.

Tír Chonaill or Dún na nGall, as the county is known in Irish, is characterised by breathtaking landscape, clinquant coastlines, and a deeply-embedded Irish culture. Here are the ten best things to do in Donegal.

Kicking off our list of the best things to do in Donegal is a trip to the small village of Dunfanaghy, situated on the Wild Atlantic Way and overlooked by the Derryveagh Mountains.

Despite its small size, there is much to do, thanks to its golf course, horse riding, and hill walking. At the same time, beach-lovers are treated to the range of Blue Flag beaches around the area that encompass the Sheephaven Bay shores. Dunfanaghy is certainly one of the ten best places to visit in Donegal.

9. Buncrana – for the views of Lough Swilly

Buncrana is a town in Donegal and is extremely accessible for visitors, as it is only 23km (14 miles) from Derry City and 43km (27 miles) from Letterkenny, Donegal’s most populated town.

We have put Buncrana on the list as the town sits on the shores of Lough Swilly, creating a picturesque setting typical of Donegal, taking in the town, water, and hills.

One of the best things to do in Donegal is to take a trip to Malin Head, located on the Inishowen Peninsula. It takes the prizes as the most northern point on the island of Ireland.

If you are in Donegal, Malin Head is the start of your trip along the Wild Atlantic Way. Better still, Malin Head was featured in Star Wars: The Last Jedi, when the Millennium Falcon rested itself on the cliffs.

7. Fanad Head – one of the world’s most beautiful lighthouses

Fanad Head is a Gaeltacht area (where the Irish language is spoken) and is located on the eastern shore of the Fanad Peninsula, so it is made up of all the best Donegal can offer.

At its very tip, you will find the Fanad Head lighthouse, which tiptoes around the rocky edges of Donegal’s coastline and keeps a watchful eye over both Lough Swilly and Mulroy Bay.

Bundoran is the most southerly town in Donegal, not far from County Sligo. It is a fan-favourite for holiday goers to Donegal.

It is the county’s premier seaside resort, and earns the nickname ‘Fundoran’, thanks to its amusements, activities, beaches, and surfing. It was named as one of the world’s twenty-best surfing resorts in 2012 and is one of the ten best places to visit in Donegal.

5. Portsalon Beach – the most beautiful beach in Donegal

Donegal is famously lined with several world-class beaches, and perhaps the chief among them all is the Magherawarden/Portsalon Beach, a mile of golden sandy paradise bordering the Atlantic Ocean.

Portsalon Beach is absolutely stunning and certainly one of the top places to see in Donegal. The beach has been awarded the prestigious Blue Flag and was even awarded the title as the second-best beach in the world by The Observer newspaper. We can’t argue with that.

4. Drive along the Wild Atlantic Way – a trip of breathtaking scenery

One of the best things you can do in Donegal is to take a drive along its leg of the Wild Atlantic Way, a journey that is filled with stunning coastlines, mountain ranges, and remote islands that will leave you in awe.

Tour the ‘Northern Headlands’ and take in the Slieve League cliffs, Tory Island, Grianán an Aileach, and Malin Head, amongst more. We promise you won’t be disappointed.

The Slieve League cliffs range above 600 metres in height, treble the size of the famous Cliffs of Moher, and scale the Atlantic Ocean that buzzes below.

Take the long walk up to the edge of the cliffs, where designated viewpoints give you a complete view of the Atlantic, Donegal Bay, and the Sligo Mountains.

Mount Errigal is undoubtedly one of the most memorable emblems of County Donegal. Nestled next to Gweedore town, the mountain towers over its vast green landscape below, standing at at 751 metres.

Errigal is the tallest mountain in Donegal, the largest in the Derryveagh family, and its piercing peak glitters in white snow during the winter months. Errigal is certainly one of the best places to visit in Donegal.

Glenveagh is the second-largest park in all of Ireland, and its scenic walking trails coincide with the majestic Lough Veagh and the Glenveagh Castle, a well-preserved 18th-century creation.

Taking our prize as the number one thing to do in Donegal, enjoy the rugged mountains landscape, the 16,000 hectares of parkland, the hushed lakes, and the descending waterfalls.

In 2017, National Geographic voted County Donegal as the ‘coolest’ place in the world to visit in 2017. How could you disagree after seeing the ten best things you can do in the county?

1. What time is it in Donegal, Ireland?

2. Where is Donegal, Ireland?

Donegal is located in northwest Ireland; it is part of the Republic of Ireland.

3. What is Donegal famous for?

Donegal is known for its wild, rugged beauty, as well as Bundoran – the surfing capital of Ireland. Other sights of interest include the Slieve League Cliffs and the Wild Atlantic Way coastal route.

4. What language is spoken in Donegal?

Donegal is a Gaeltacht region, meaning the Irish language is widely spoken. That being said, English is used interchangeably and understood by the vast majority of locals, if not all.

5. Why is Donegal called the “Forgotten County”?

Donegal is called the “forgotten county” as it remains to date widely unchanged by commercialism and modern mentalities. The Irish language is still widely spoken – unlike many other counties in Ireland – and its infrastructure and ways of life are much slower and in-tune with traditional Ireland.

If you are interested in Donegal, you will find these articles really helpful:

Where to stay in Donegal

The 10 BEST Hotels in Donegal, according to reviews

5 UNBELIEVABLE Spa Hotels in Donegal You Need To Stay In

32 Irish pubs: the best pub to visit in every county of Ireland

Top Five Towns in Donegal For A Mad Night Out

The 10 Most Delicious Ways to Gain a Stone In Donegal

Top 5 reasons why Donegal is the best county in Ireland

10 MAD Donegal Words (And What They Mean in English)

Top 10 best things to do in Donegal, Ireland (County Guide)

Donegal Bucket List: 10 things you need to experience in your lifetime

Hidden gem of the week: Grianán of Aileach in County Donegal

10 amazing places in Donegal that Dublin will never have

5 things to see and do on Arranmore Island, Co. Donegal

INCREDIBLE footage of the Slieve League shows off Donegal’s scenery

Two Irish rooftop bars named among the best in Europe 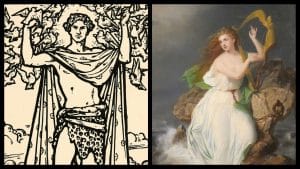