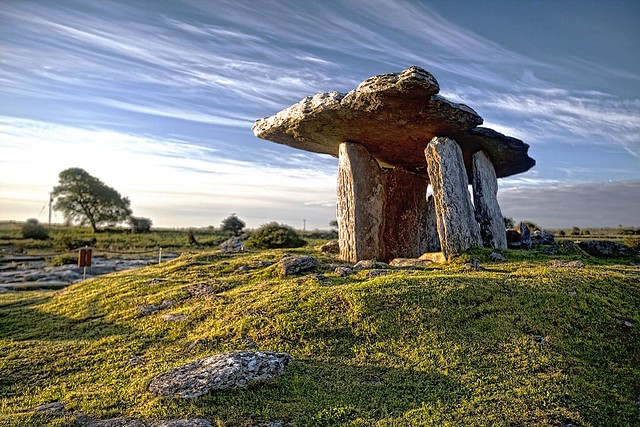 In the heart of the stark landscape stands the magnificent Poulnabrone domen. A wedge tomb, is the finrdt of over 70 burial sites to be found in the Burren’s limestone uplands and consists of four upright stones supporting a thin capstone. When the tomb was excavated in the 1960s, the remains of 20 adults, five children and a newborn baby were uncovered. Subsequent  carbon dating calculated the burials took place between 3800 and 3600BC. 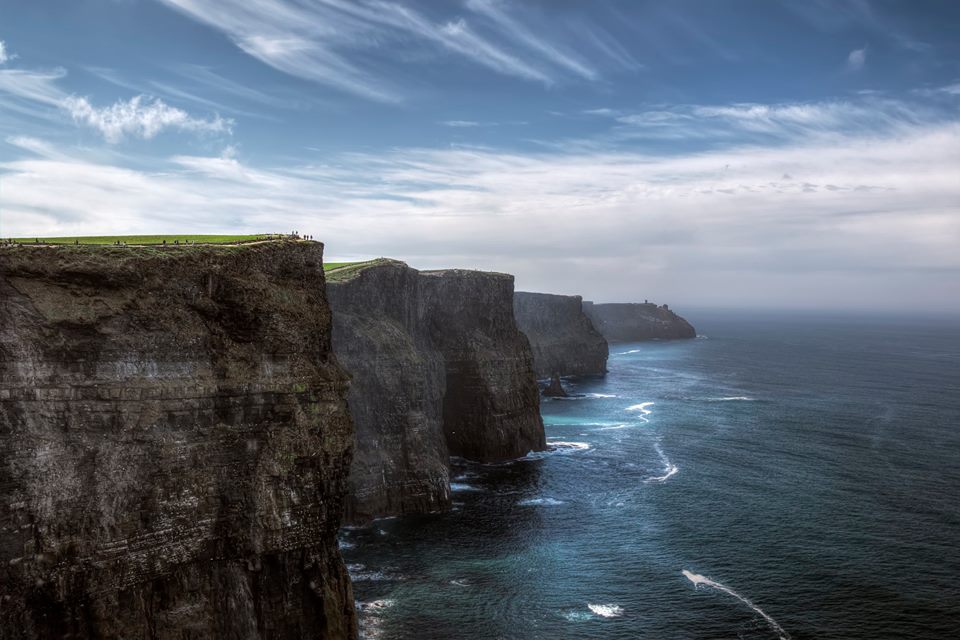 The Cliffs of Moher are Ireland’s most visited natural attraction with a magical vista that captures the hearts of up to one million visitors every year. Standing 214m (702 feet) at their highest point they stretch for 8 kilometres (5 miles) along the Atlantic coast of County Clare in the west of Ireland. From the Cliffs of Moher on a clear day one can see the Aran Islands and Galway Bay, as well as the Twelve Pins and the Maum Turk mountains in Connemara, Loop Head to the south and the Dingle Peninsula and Blasket Islands in Kerry.

Ballyvaughan village is situated between the hills of the Burren and the southern coastline of Galway Bay. Ballyvaughan (O’Behan’s Town) developed as a fishing community from the 19th century. A castle site and celtic ring fort hint at earlier habitation of this sheltered bay.

Today this community welcomes visitors to the Burren region. Each year botanists and naturalists roam this lunar landscape searching for the Arctic, Alpine and Mediterranean plants which grow in profusion over the limestone pavements. The Burren is renowned for its archeology. Ballyvaughan is surrounded by megalithic tombs such as Poulnabrone Dolmen, celtic ring forts, medieval churches and castles. Spanish Point is located on the west coast of county Clare Ireland. Spanish Point takes it’s name from the unfortunate Spanish who died here in 1588, when many ships of the Spanish Armada were wrecked during stormy weather. Those who survived the wrecking and sinking of their ships and made it to land were executed by Sir Turlough O’Brien of Liscannor and Boethius Clancy, High Sheriff of County Clare at the time. 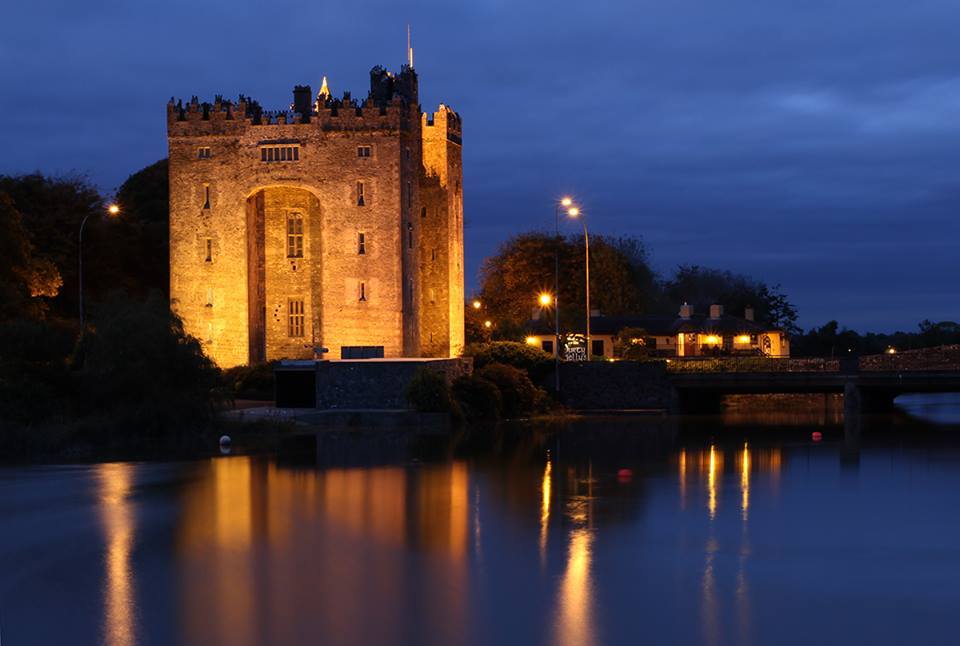 Bunratty Castle is a large 15th century tower house in County Clare, Ireland. It is located in the centre of Bunratty village, by the N18 road between Limerick and Ennis, near Shannon Town and its airport. The castle and the adjoining folk park are run by Shannon Heritage as tourist attractions.

King John’s Castle is a 13th-century castle located on King’s Island in Limerick, Ireland, next to the River Shannon. Although the site dates back to 922 when the Vikings lived on the Island, the castle itself was built on the orders of King John in 1200. One of the best preserved Norman castles in Europe, the walls, towers and fortifications remain today and are visitor attractions. The remains of a Viking settlement were uncovered during archaeological excavations at the site in 1900.

Adare Manor is a 19th-century manor house located on the banks of the River Maigue in the village of Adare, County Limerick, Ireland, the former seat of the Earl of Dunraven and Mount-Earl, now a luxury resort hotel – the Adare Manor Hotel & Golf Resort. 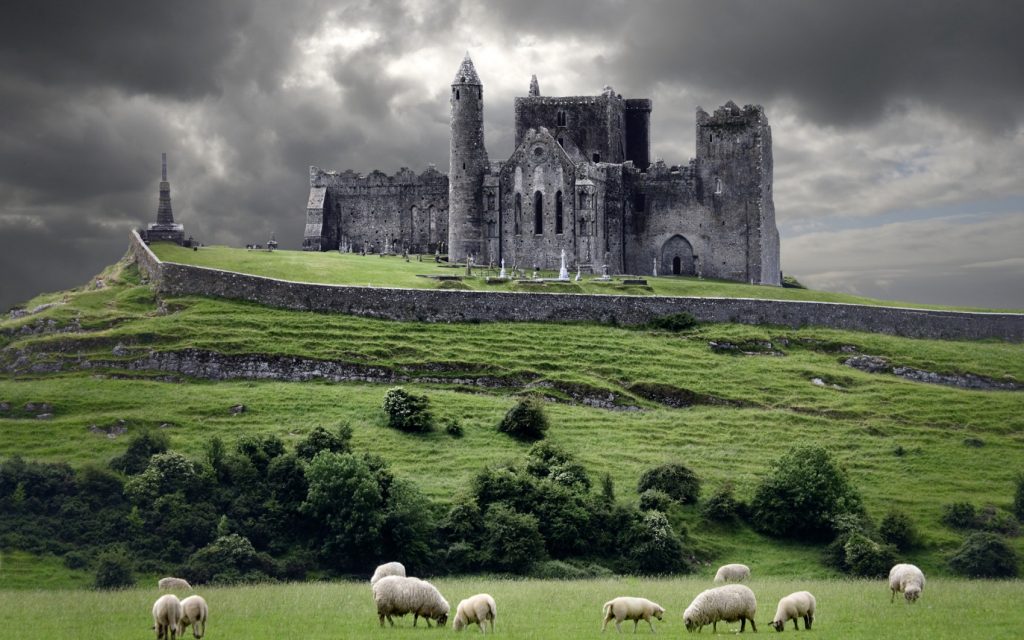 The Rock of Cashel, Co. Tipperary. Also known as Cashel of the Kings and St. Patrick’s Rock, is a historic site located at Cashel. The Rock of Cashel was the traditional seat of the kings of Munster for several hundred years prior to the Norman invasion. In 1101, the King of Munster, Muirchertach Ua Briain, donated his fortress on the Rock to the Church. The picturesque complex has a character of its own and is one of the most remarkable collections of Celtic art and medieval architecture to be found anywhere in Europe. Few remnants of the early structures survive; the majority of buildings on the current site date from the 12th and 13th centuries.
9. Cahir Castle, Co. Tipperary 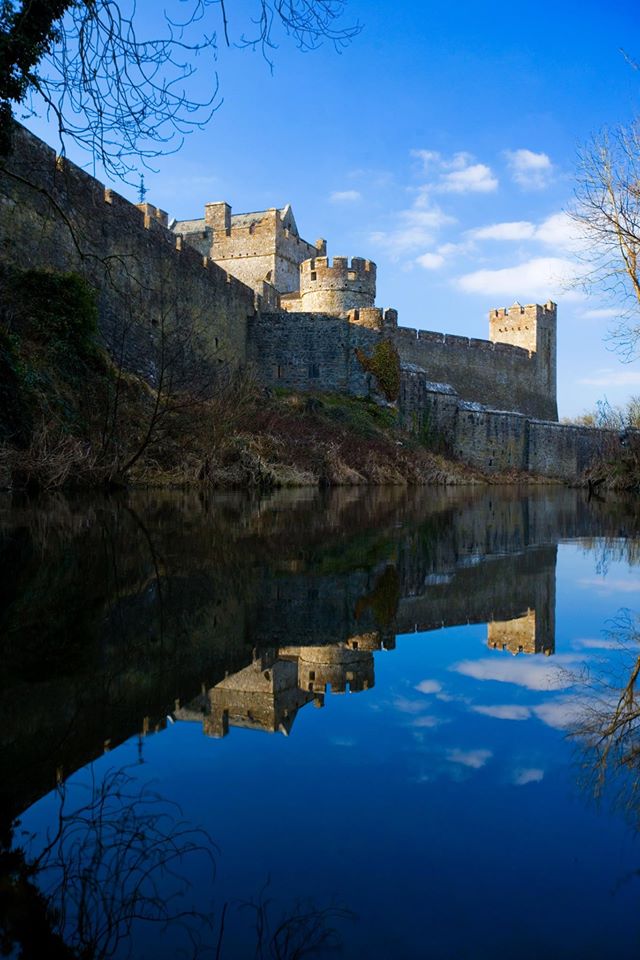 Cahir Castle, one of the largest castles in Ireland, is sited on an island in the river Suir. It was built in 1142 by Conor O’Brien, Prince of Thomond. Now situated in Cahir town centre, County Tipperary, the castle is well preserved and has guided tour and audiovisual shows in multiple languages.
10. The Swiss Cottage, Co. Tipperary

The Swiss cottage was built around 1810 and is a fine example of cottage ornée, or ornamental cottage. It was originally part of the estate of Lord and Lady Cahir, and used for entertaining guests. The cottage was probably designed by the architect John Nash, famous for designing many Regency buildings. Cahir, alternately spelt: Cahier, Caher, Cathair Dún Iascaigh, may have been built by Richard Butler,[2] 10th Baron Cahir, 1st Earl of Glengall (1775–1819), who married Emily Jeffereys from Blarney Castle in 1793. After some years of neglect, restoration of the cottage started in 1985. The Swiss cottage opened to the public as a historic house museum in 1989.
11. Holy Cross Abbey 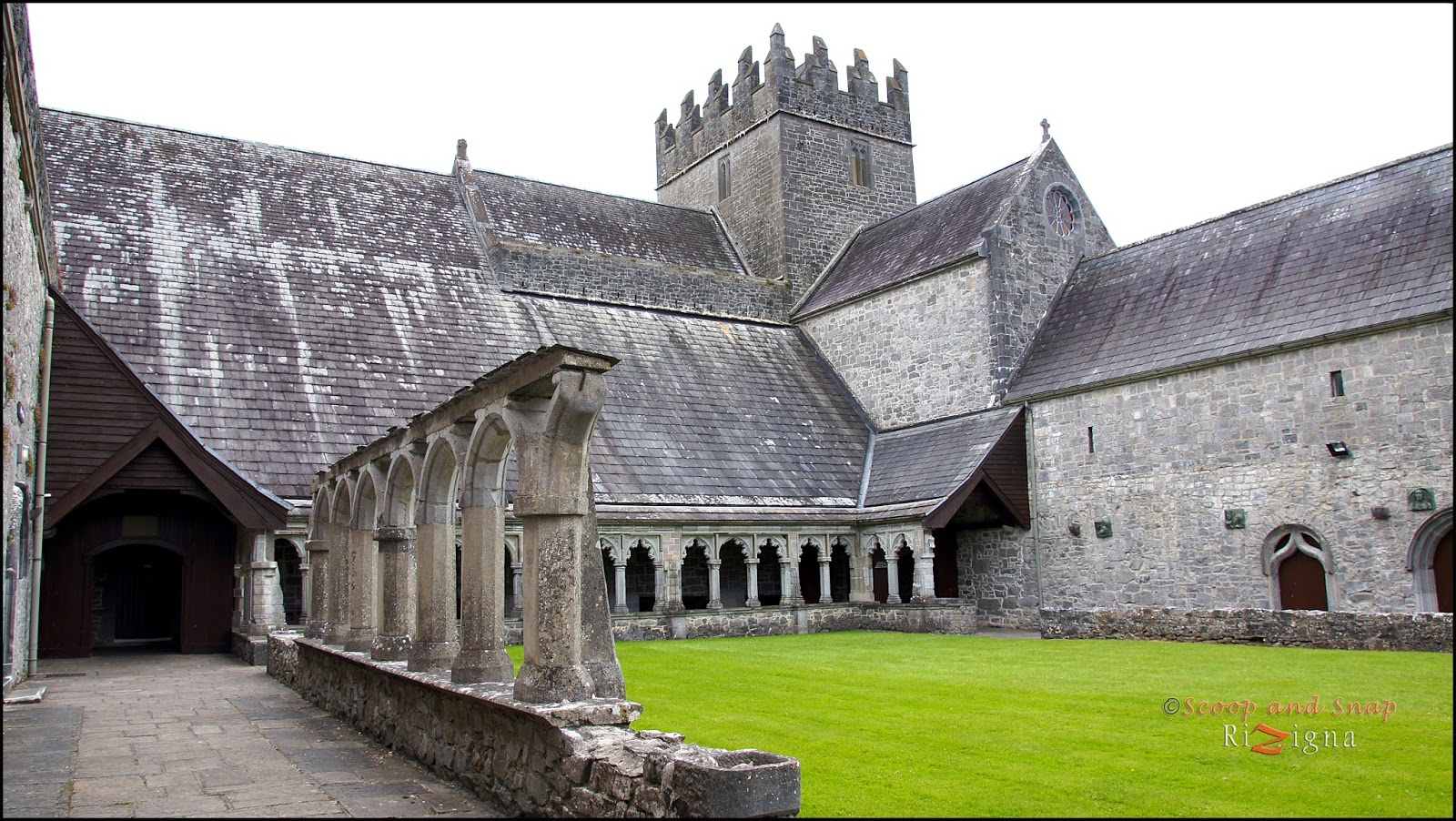 The Holy Cross Abbey in Tipperary is a restored Cistercian monastery in Holycross near Thurles, County Tipperary, Ireland, situated on the River Suir. It takes its name from a relic of the True Cross or Holy rood. The fragment of that Holy rood was brought to Ireland by the Plantagenet Queen, Isabella of Angoulême, around 1233. She was the widow of King John and bestowed the relic on the original Cistercian Monastery in Thurles, which she then rebuilt, and which was thenceforth thereby named Holy Cross Abbey.