The 100 Most Common Irish Family Names Ranked In Order.

When you read an Irish last name (or surname) such as O’Neill, Kennedy or Gallagher, you instantly know they are either Irish, from an Irish family or of Irish descent.

Irish people have influenced the world and their surnames have become well recognised and associated with the Emerald Isle.

There are many different origins for Irish family names today but the vast majority can be broken down into either of three categories: Gaelic Irish, Cambro-Norman, and finally Anglo-Irish.

It always prompts makes you ask, which names are the most common in Ireland?

The Table below gives a listing of the 100 most common last names found in Ireland and their meanings:

We recommend using ancestry.com to find your family. You can also find their DNA kit to tell you much more than just the places you’re from. For more info, visit ancestry.com.

The Irish people are an ethnic group native to the island of Ireland, who share a common Irish ancestry, identity and culture. Ireland as an island has been inhabited for about 12,500 years according to archaeological studies.

For most of Ireland’s history, the Irish have been primarily a Gaelic people (see Gaelic Ireland). Anglo-Normans conquered parts of Ireland in the 12th century, while England’s 16th/17th-century (re)conquest and colonisation of Ireland brought a large number of English and Lowland Scots people to parts of the island, especially the north.

The Irish are renowned globally for their customs, language, music, dance, sports, cuisine, friendliness, large families and mythology. Although Irish (Gaelic/Gaeilge) was their main language in the past, today most Irish people speak English as their first language.

Historically, the Irish nation was made up of kin groups or clans, and the Irish also had their own religion, law code, alphabet and style of dress.

The population of Ireland is approximately 6.3 million, however, it’s estimated that 50 to 80 million people around the world have Irish forebears, making the Irish diaspora one of the biggest of any nation.

Over history, emigration from Ireland has been the result of conflict, famine and economic issues. People of Irish descent and as a result, Irish family names are found mainly in English-speaking countries, especially Great Britain, the United States, Canada and Australia.

There are also significant numbers in Argentina, Mexico and New Zealand. The United States has the most people of Irish descent, while in Australia those of Irish descent are a higher percentage of the population than in any other country outside Ireland. Many Icelanders have Irish and Scottish Gaelic forebears.

In these countries, you may find some difficult to pronounce Irish last names. You may also find some stereotypical Irish surnames.

As a result of the high numbers of Irish people all around the world, Irish last names can be found all over the world.

We recommend using ancestry.com to find your family. You can also find their DNA kit to tell you much more than just the places you’re from. For more info, visit ancestry.com.

Find out how Irish you are from a DNA Kit

Find our guide to tracing your roots with the help of a DNA kit HERE. 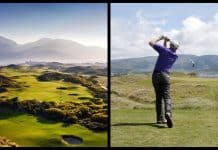 Jade Poleon - April 10, 2020
Ireland is one of the leading countries when it comes to golf. Here are the ten best golf courses in Ireland.