The Christmas period is all about tradition, and that extends to sporting events as much as it does to anything else.

Cricket enthusiasts talk in hushed tones about the Boxing Day Test at the MCG in Australia.

Over in the US, meanwhile, NFL fans check out which teams will be playing on or around Christmas Day as soon as the schedules are released in late summer.

In Ireland, you won’t find much cricket or American Football going on, but that’s not to say we don’t have our sporting traditions.

At Christmas, sports fans know there is only one place to head. Leopardstown Racecourse is a 30-40 minute drive south of Dublin and is home to a racing festival that is as Christmassy as brandy butter or yet another repeat of Casablanca.

The Leopardstown Christmas Festival is a tradition that goes right back to the earliest days of the racecourse’s 130-year history.

Like all the best Christmas traditions, though, it has moved enough with the times to remain relevant and appeal to each new generation.

In the internet age, it now attracts interest from horse racing fans far beyond Ireland. If you can’t make it there in person, you can always choose a betting app for your smartphone and settle down in the post-Christmas quiet to follow the action from your sofa and perhaps even to take advantage of the tips on offer and pick yourself a winner or two.

The idea is an attractive one, as today’s apps provide more than just an opportunity to place a bet. They also deliver tips, reviews, expert opinions and sometimes even live streams of races or highlights of those that have recently been run.

The festival gets underway on 26th December at 12:10 with the TOTE Maiden Hurdle. This will be the first of seven St Stephen’s Day races, with the highlight being the Racing Post Novice Chase. This Grade 1 race is the fifth on the day’s calendar and is scheduled to start at 2:20 PM.

In 2018, Mark Walsh won the race on Le Richebourg, coming in ahead of stablemate Us and Them. That made it a memorable one-two for trainer Joseph O’Brien, and he’ll be looking for more of the same this year.

It’s all about the luck of the Irish on Day Two of the festival, and the main sponsor of the showcase race, the Paddy Power Chase, will make sure the whole of Leopardstown is green, whatever the weather.

This is the biggest race of the whole festival, and so you can expect to see an exciting blend of holiday visitors and serious racing punters at the track.

Last year’s race was one for the ages, with 28/1 outsider Auvergnat astonishing one and all by romping in first.

The horse’s owner JP McManus was as surprised as anyone. He had no fewer than eight horses running in the high profile race, including 5/1 favourite Any Second Now.

Auvergnat was ridden by Limerick lad Donie McInerney and one person who wasn’t surprised was trainer Enda Bolger. He told reporters that McInerney was always the first to turn up in the morning and had spent Christmas Day in the stables mucking out and riding on the gallops.

He said the result was the culmination of hard work and dedication, and that it was “not by accident.”

By 28th December at the Leopardstown Christmas Festival, it is time to get rid of the paper party hats and swap them for something a little more sophisticated.

That’s certainly the case if you are attending Ladies Day at Leopardstown. As well as more top-notch racing with two Group 1 races, there will be the small matter of the Savills Style Awards for those with a flair for the sartorial.

It’s open to men and women, all you have to do is register at the Savills desk in the Christmas Marquee. There will also be fashion scouts prowling among the racegoers and searching for the most stylish visitors.

Out on the track, meanwhile, the Savills Chase will be the feature race of the day. Last year’s winner was Kemboy, trained by the legendary Willie Mullins and ridden that day by his nephew David Mullins. That won’t be repeated this year, as Mullins Jr is currently recovering at home from surgery following a serious fall at Thurles last month.

The atmosphere is all about family fun on the closing day of the festival. Here, the big race will be the Leopardstown Christmas Hurdle, and the question on everyone’s lips is whether the Michael O’Leary owned and Gordon Elliot trained Apple’s Jade will race yet again.

Last year, she became the first horse to win the race twice, and there is nothing to say O’Leary and Elliot won’t try to make it three in three.

Like the preceding days, this will be one of seven races on the schedule for the day, but Sunday is a day when there is just as much happening off the track as on it.

This is when it’s traditional for the whole family to come along, and under 18s can enter the racecourse for free provided they are accompanied by their parent or guardian.

There will be no shortage of things happening to keep the youngsters amused if they are not so interested in the racing itself.

For example, the Christmas Marquee will take on quite a different vibe on Sunday, with games, inflatables, face painting and plenty more.

Tango in the night

When the final race has been run, the festival reaches a climactic conclusion on Sunday evening courtesy of Mack Fleetwood.

This is one of the most respected Fleetwood Mac tribute acts on the planet and sells out venues across Europe.

It’s a magical way to round off a racing festival that is like no other, so start making your plans now.

Tickets for the Leopardstown Christmas Festival are likely to sell out rapidly, so it makes sense to book early to avoid missing out. 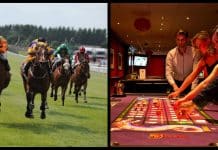 The 5 best places in Ireland for a bet 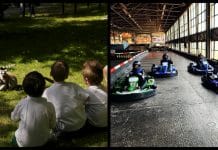