A rather bleak look towards the Bank Holiday weekend as temperatures are set to plummet and heavy rain is expected on Friday. The north of Ireland should also get ready for some hail showers on Saturday.

Irish weather experts Met Eireann predict that Ireland is set to be colder than normal especially after dusk when we can expect widespread frost.

Things dry up a bit towards the end of the week as sunny spells cast over Ireland on Sunday, but we should still wrap up as temperatures are expected to have a high of just 10 degrees.

After a fairly dry week, Friday is set to be miserable with heavy rain and thunder expected alongside very cold temperatures.

The east sees extremely heavy rain all throughout the day. Expect thundery weather and a downpour that will begin from the early morning. Showers are predicted to be slightly less turbulent in the northeast, but temperatures are at a low of 6 degrees Celsius.

The southern coast is expected to be equally as wet. Weather experts have warned that the south is especially likely to experience localised flooding. There are highs of 8 degrees Celsius in the southeast, while temperatures are expected to be lower further west.

The north might see some light sunshine breaking through between showers, but it will remain mostly wet and cold throughout the day with highs of 6 degrees Celsius.

The west will see the lowest temperatures of between 5 and 6 degrees Celsius and heavy showers holding up throughout the day.

We should expect the weather to clear up a bit overnight as showers become less heavy, but temperatures will drop to as low as 2 degrees Celsius and some heftier showers will hold up around Co. Donegal and Co. Waterford.

Drying up with some sunny spells

The Ireland Weather Forecast for Saturday begins with heavy rain over parts of Munster and south Leinster, but thankfully it clears and heads southwards. The bad news is that temperatures continue to lower and strong frost is to be anticipated on roads.

The east will enjoy a mostly clear day with some sunny spells after the early rain has cleared. It will be quite dry with low wind speeds of 15 kmph and a high of 9 degrees Celsius in Co. Dublin.

Further south we should expect the weather to act in a similar fashion as sunshine sprays over Ireland with highs of 9 degrees Celsius in Co. Cork. Expect some cloud with a chance of rain along the coast, but the day is predicted to remain mostly dry.

In the north and northwest, rain can be expected sporadically throughout the day. Weather experts have also predicted that there may be some hail showers between the sunny spells, although it will remain bright and temperatures should not fall below 7 degrees Celsius.

The west receives lovely sunshine once the early rain in Munster has passed, although this may linger for longer in the northwest around Co. Fermanagh. Temperatures average at between 8 and 9 degrees Celsius.

Be sure to wrap up in the evening as temperatures are lower than on Friday night. Overnight the east and west coastlines must endure temperatures of 1 degree Celsius, and some heavy rain will lash over the northwest.

Sunday’s temperatures in this week’s Ireland Weather Forecast remain consistent across Ireland as the sun continues to shine, but we should still expect some showers in more coastal areas, and during the evening temperatures are set to get lower.

We will see the weekend’s highest temperature on Sunday as Co. Dublin and much of Leinster see 10 degrees Celsius under sunshine and clear skies. The east and south of Ireland will enjoy sunny spells throughout the day and wind speeds of between 15 and 20 kmph.

Similar spells of sunshine will cast over the west of Ireland, but be sure to wrap up as temperatures will drop very suddenly as the sun sets in the evening and a chill arrives into the air.

The northwest continues to see more rain than elsewhere in the Emerald Isle but temperatures remain at about 9 degrees Celsius throughout the day with sunny spells and moderate winds.

Through the night we should expect temperatures to hit 0 in many areas of Ireland, especially in eastern Connacht and into the west of Leinster. There will be a sharp chill in the air and bitter frosts on the ground – take care during your morning commutes as grounds are expected to be slippery. 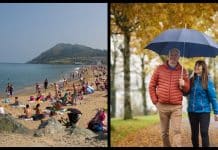 What to wear in Ireland: a packing List for all seasons 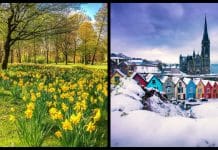 Best time to visit Ireland: a guide by weather, price, and crowds 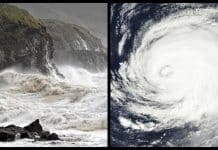