County Clare on Ireland’s Atlantic coast is famed not only in Ireland but all over the world as the home of Irish music. Each year thousands of visitors flock here to enjoy the many festivals and fleadhs and take in the magnificent scenery, which varies from the lush fields and glorious lakes in the east of the county to the wild remoteness of the Atlantic coast. Clare People are known for their ability to enjoy the ‘craic,’ that uniquely Irish term for simply having fun. Where better to enjoy the craic and meet the friendly locals but in a true Irish pub, and Clare has many. In this feature Local journalist and adopted son of Clare, Ger Leddin looks at five of the best pubs Clare has to offer.

Liscannor is a tiny harbour village on Clare’s Atlantic coast. Lying on the tourist route between the resort of Lahinch and the busier town of Doolin and very close to the world-renowned Cliffs of Moher. Liscannor’s closeness to its more tourist orientated neighbours has not spoilt its coastal village charm. Liscannor can boast about its most famous son, John Philip Holland the inventor of the modern-day submarine and it can also boast about one of the finest village pubs in Ireland — Joseph McHugh’s.

The first customers were served in McHughs in 1899 and since then all customers have been treated to the warm and friendly atmosphere of this family run pub. The friendly atmosphere that this pub is still famous for has even been immortalized in traditional Irish verse. “If you’re Irish or Spanish, or Russian or Jew, you’ll get a warm welcome from Joseph McHugh.”

McHugh’s association with sport dates back to the original owner, Joseph, who had a love for all things sporting. The present owners continue Joseph’s ethos of hospitality and good drink served at keen prices and always with a smile. What more could you want? 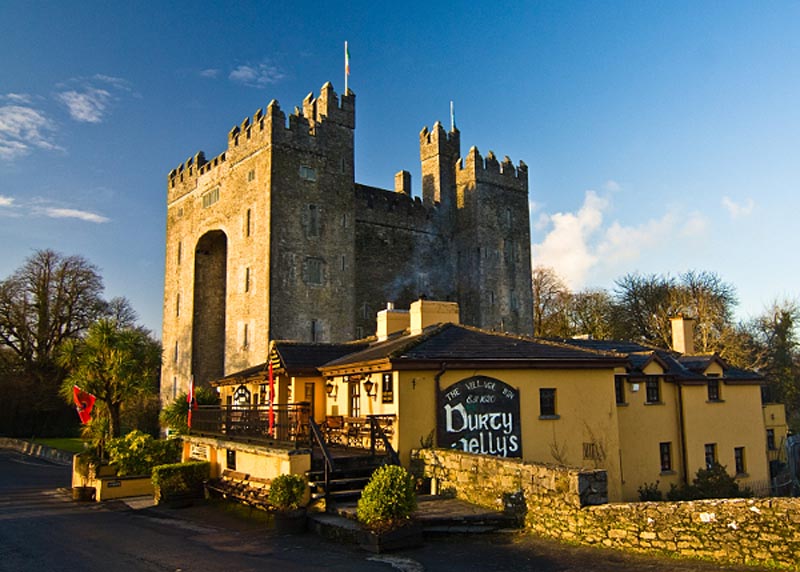 Situated just a few short miles from Shannon Airport is what must be one of Ireland’s best-known pubs, Durty Nelly’s. What makes Nelly’s, as it is known locally; stand out from the crowd of so-called Irish themed pubs is that this one is simply the original. During the 1620’s Durty Nelly, as she was called, was the toll-taker for those wishing to cross the bridge outside her small cottage in the shadows of the medieval castle, Bunratty, just a few yards away. Nelly supplemented her income by running a small shebeen in her cottage from where she would quench the thirst of weary travellers.

Since those early days of four-hundred years ago, the same cottage has been quenching the thirst of both locals and travellers alike. What makes Nelly’s stand out from the run of the mill tourist pub is the way in which both tourist and locals interact. Yes like in many pubs in Clare you will find fine and wholesome food, your choice of tipple — you even get the chance to pull your own Guinness — and frequent music sessions. But remember there is a four-hundred-year-old tradition in Nelly’s of making the visitor welcome. 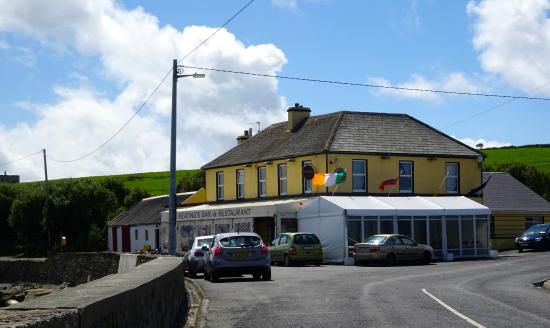 Keating’s bar in Kilbaha, on the Loop Head Peninsula, is arguably the furthest west you can travel in Clare without getting your feet wet. In fact, the bar’s owners Bernie and Helen Keating claim their small village bar is the closest bar in Ireland to New York. Leaving this slightly dubious credit aside, Keating’s can lay claim to being one of the friendliness establishments on the west coast of Ireland. A typical Irish pub with no frills or gimmicks, this pub has been passed down through generations of the same family. The bar is conveniently close to the recently restored tourist attraction that is the Loop Head Lighthouse — well worth a visit — and also close to the Bridges of Ross, the sea arches, and beach on the western side of the peninsula. An attractive cove where the storm scenes for the film Ryan’s Daughter were shot, if you look carefully enough you will still see the steel camera anchor points wedged in the rocky beach. As I said Keating’s is a no-frills typical harbour bar, an ideal place to relax with your back to the sun while sitting on the harbour wall just outside the pub’s front door after a day’s sightseeing on the Loop. 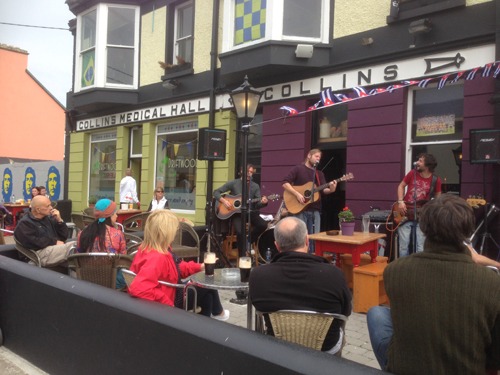 The seaside town of Kilkee with its wide horseshoe-shaped bay and sandy beach has for hundreds of years been considered Clare’s premier holiday resort. Since the reign of Queen Victoria families have holidayed here, strolled its promenade, played on its beach and swum in its world-famous natural rock pools — the Pollock Holes. Generation after generation of families has returned annually to the town to holiday, many making a second home here in order to enjoy the location all year round. The Greyhound bar has over the past twenty or so years become synonymous with the town.

Affectionately nicknamed the Skinny Dog by its regulars the premises was once a chemist’s shop and dispensary. The building, which is deceptively small looking from the outside, still carries the name of the original owners — the Collins Family — on its front facade.
The pub’s interior is nothing if not quaint. A low ceiling and soft lighting highlight the timber-panelled walls and original floorboards. The Greyhound’s present owners have managed to achieve the balance between a quiet and friendly local pub where you can mingle during the afternoon, evening and night with its clientele of visiting scuba divers, windsurfers, fishermen and holidaymakers relaxing in the cozy interior. Or if the mood takes you, enjoy one of the live music performances late into the night. The Greyhound is rapidly becoming one of Ireland’s better known live-music venues, with national and international acts performing here regularly. The Greyhound is a different sort of a pub, a holiday maker’s pub, a pub where everyone is out for a good time, a pub you’ll be guaranteed to enjoy. 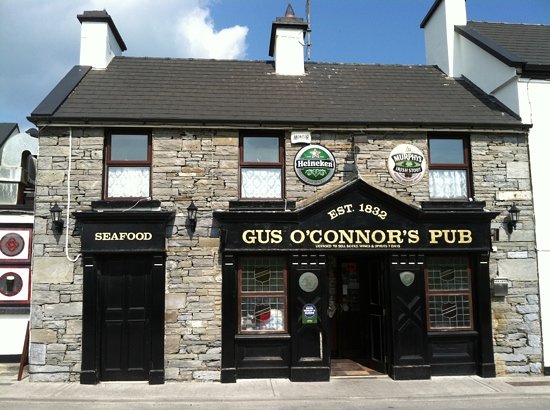 The small — once primarily a fishing village — coastal village of Doolin, from where you can avail of the ferries to and from the Aran Islands is now world famous as the epicentre of traditional music. And there is none so famous a listening venue as Gus O’Connor’s pub in the heart of the village, just a short stroll from the pier. O’Connor’s pub first opened its doors in 1832 and since then the music hasn’t really stopped. The traditional Irish music sessions are scheduled to start at about 9:00 pm every evening, but most afternoons you will find talented musicians just getting together informally to ply a few tunes.

The food here is excellent. Mostly Irish traditional cooking, stews and a wide selection of locally caught fresh fish. The atmosphere on a weekend or summer night can be electric. At times jam-packed with music lovers, so much so you might not get a seat and even have to venture outside and sit along the low stone wall. But one thing is for sure you’ll always enjoy the craic in O’Connor’s. These are only five pubs out of the hundreds in the Banner County of Clare. But where ever you decide to quench your thirst and rest from your travels, you’ll be sure to find a warm and embracing welcome. Clare people are like that. Enjoy.