It is always fascinating to find rare photos of the city you live in and to see how much it is changed. This is certainly the case for the city of Belfast. Below are a number of rare old photos of Belfast that will stun you! 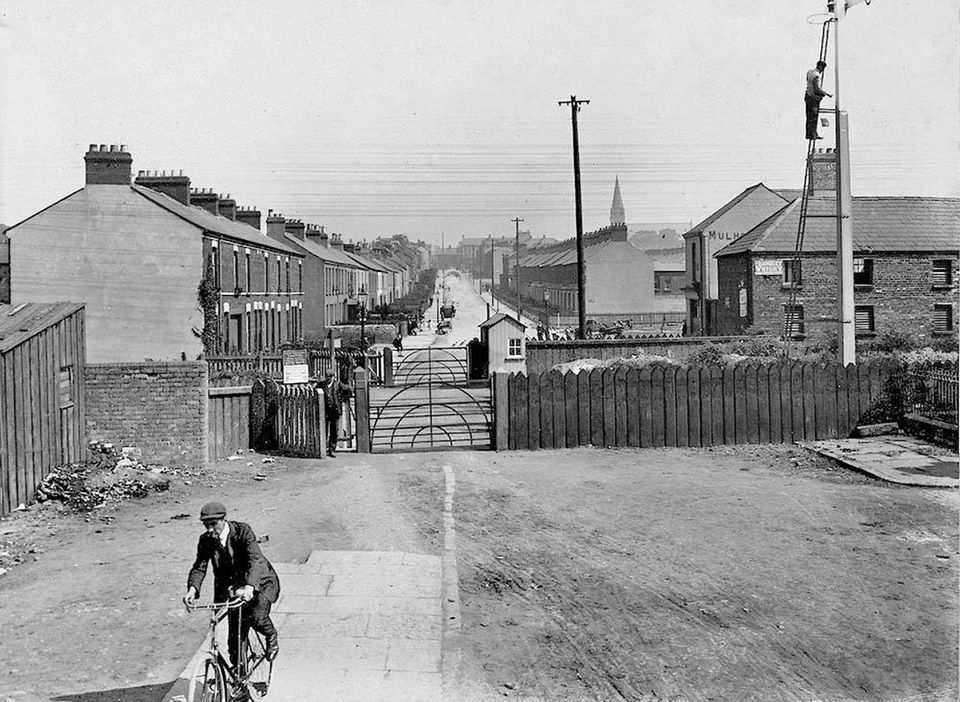 This is a great shot of Tate’s Avenue (looking up towards the Lisburn Road) which, at the time when this photograph was taken, was transversed by the tracks of the Great Northern Railway (from Belfast to Dublin). 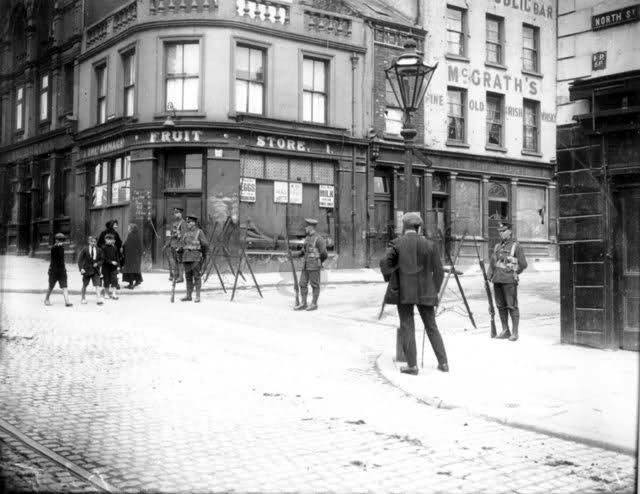 British soldiers from nearby Victoria Barracks at the junction of Carrick Hill and North Street during the major disturbances that broke out in Belfast following the partition of Ireland in the early 1920s.

Looking up Donegall Street on the 22nd of April 1952. On the left can be seen the famous McGlade’s Bar which was a favourite haunt for journalists from the Irish News (seen on the right of the photograph), the Belfast Telegraph (which was at the rear of the bar, The Newsletter and Northern Whig, both of whom were further down the street. (Photograph Yesterdays Photos) 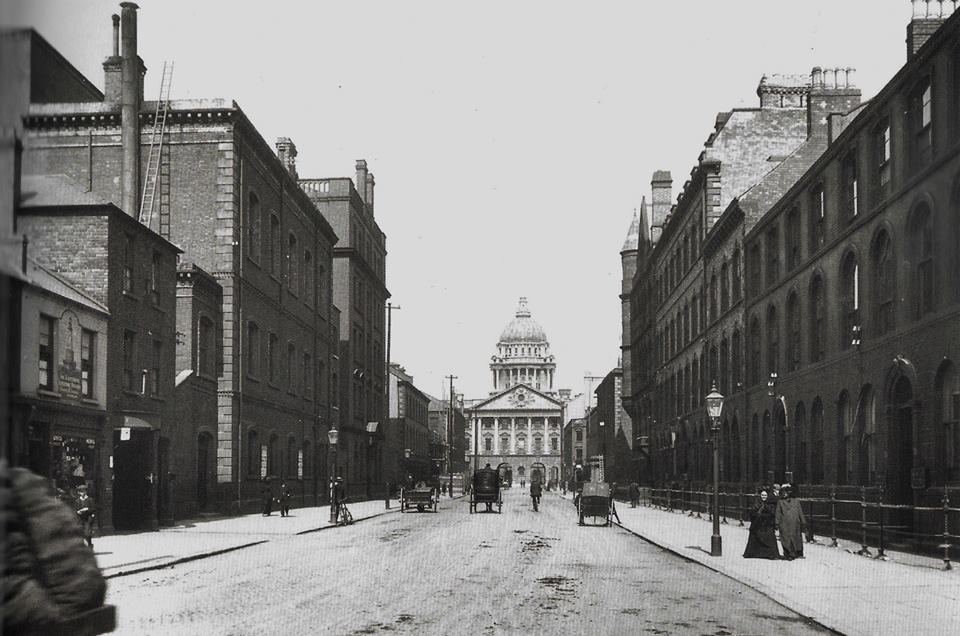 A clear view of City Hall looking up Linenhall Street in 1913. The peaceful nature of this photograph disguises the horrors of the Great War which would break out the following year and claim so many young lives from not only Ulster, but Ireland as a whole. 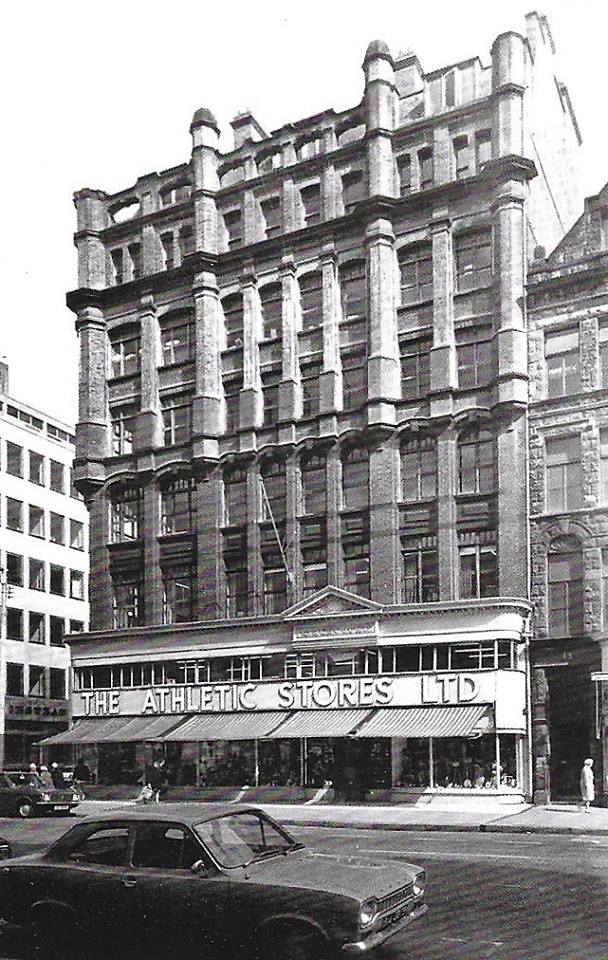 Before the days of JD Sports, Belfast had its very own sportswear shop, The Athletic Stores on the corner of Wellington Place and Queen Street. Originally erected in 1899 in the “American Style” for Alexander King, a coal merchant, it was named Kingscourt, after its owner. 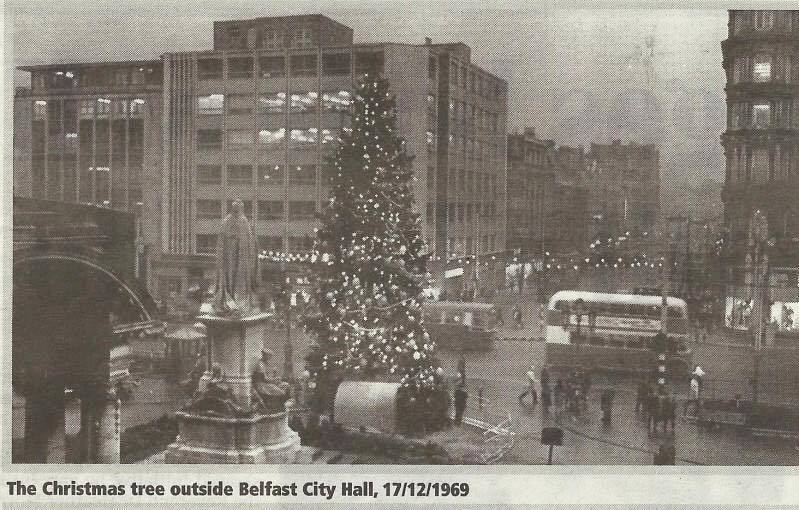 This press photograph of “the tree” was taken from City Hall in 1969. Robinson & Cleaver’s (right) would have been packed with Christmas shoppers as would H Samuel’s on the opposite corner! 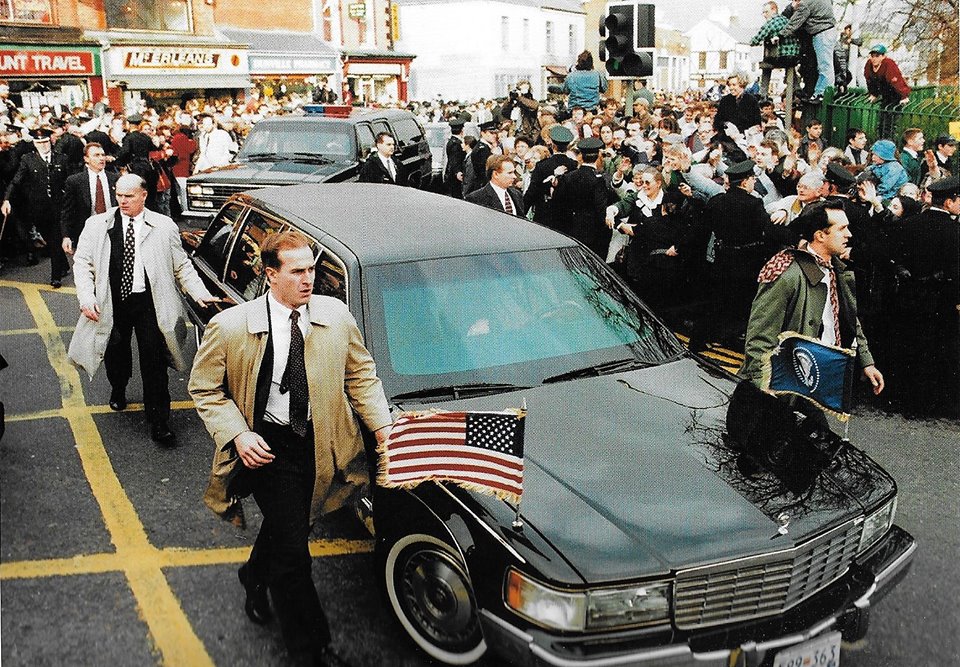 Its the 30th November 1995 and Air Force One has just landed in Belfast. The President and First Lady make a whirlwind tour of West Belfast speaking to locals on the Falls and Shankill Road – here their armoured car turns the corner from the Falls onto the Grosvenor Road. Later that night they stayed at the Europa Hotel with their own personal staff on the 9th, 10th and 11th floors. The chief event of the Thursday evening of their stay was the switching on of the Christmas Lights at City Hall in front of thousands! Cornmarket from High Street 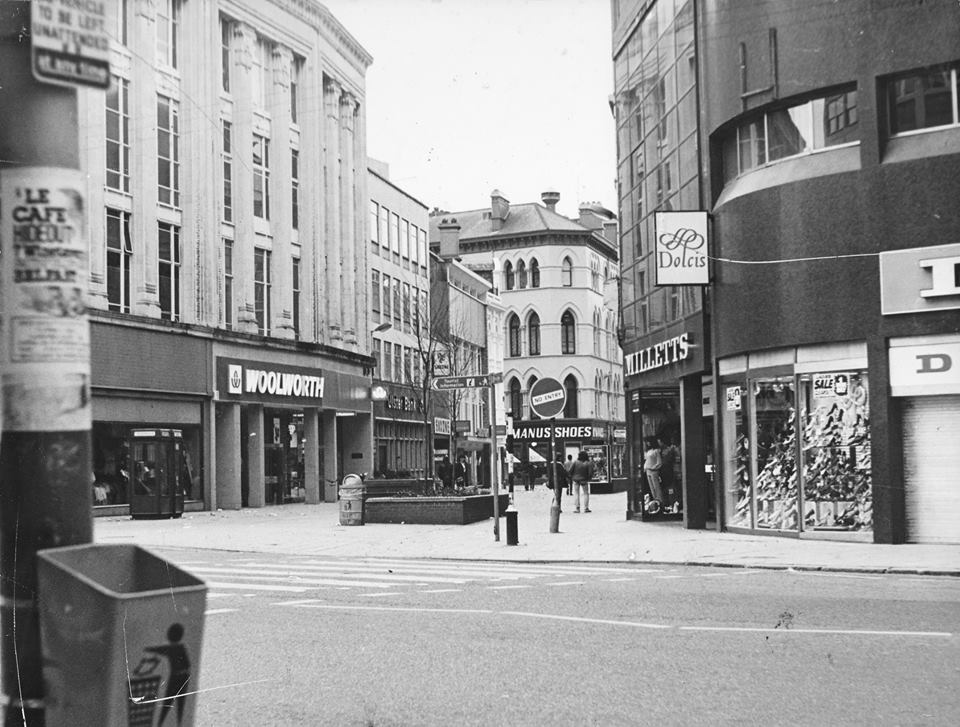 Looking down Cornmarket from High Street in the mid-1980s. It is hard to believe that every single shop seen in this picture is now gone and replaced with new stores and outlets. 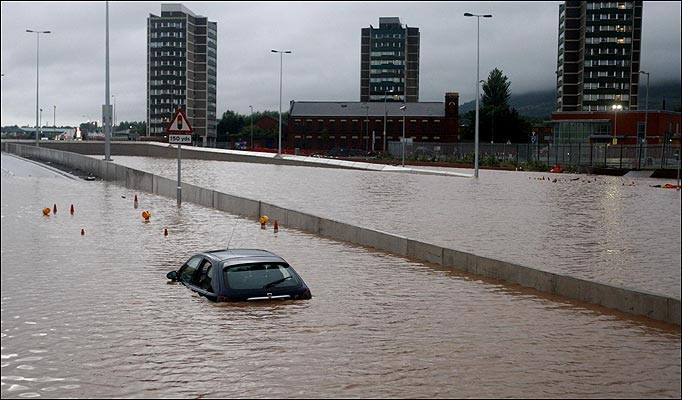 It should have been an ordinary Summer’s day in August 2008, but then this happened. Anyone who was in Belfast on this day will remember it. Shortly after, an investigation was launched by Roads Service after the Westlink underpass was submerged in 20 feet of floodwater. The new underpass resulted in widespread traffic chaos across Belfast — as emergency services try to pump out the floodwater. 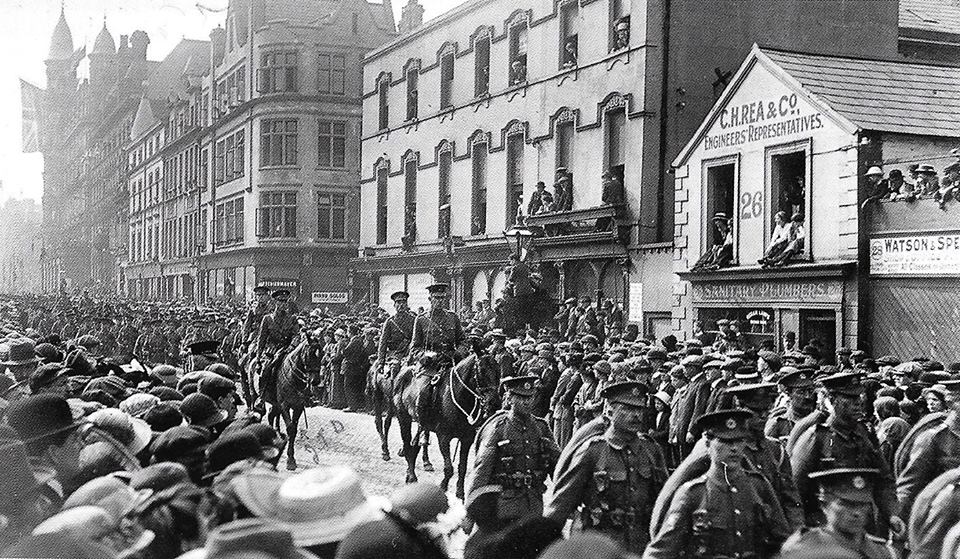 The scene is Chichester Street, Belfast in May 1915. Men from all walks of life from all over Ireland volunteered for service in Kitchener’s Army to add to the numbers of men already enlisted for active service in France. These men of the 36th Ulster Division parading past City Hall would soon leave Belfast to fight at the Somme, the majority never to return home. 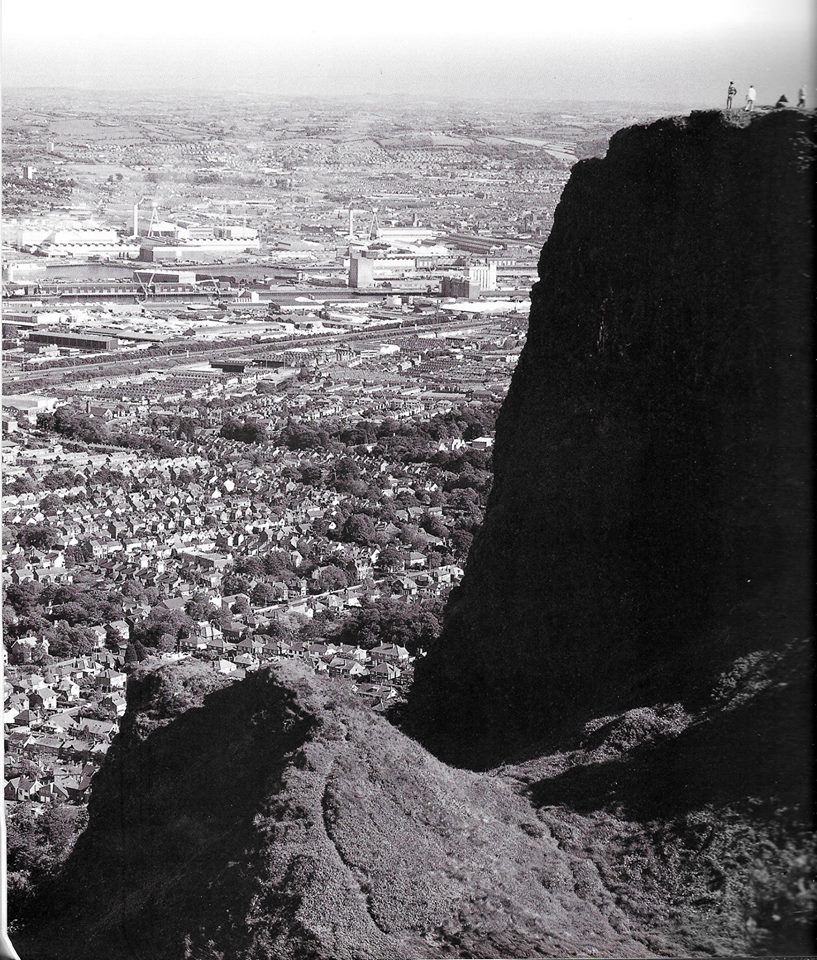 An amazing picture here of a group of people who climbed to the top of Cavehill and took in the amazing view of Belfast. 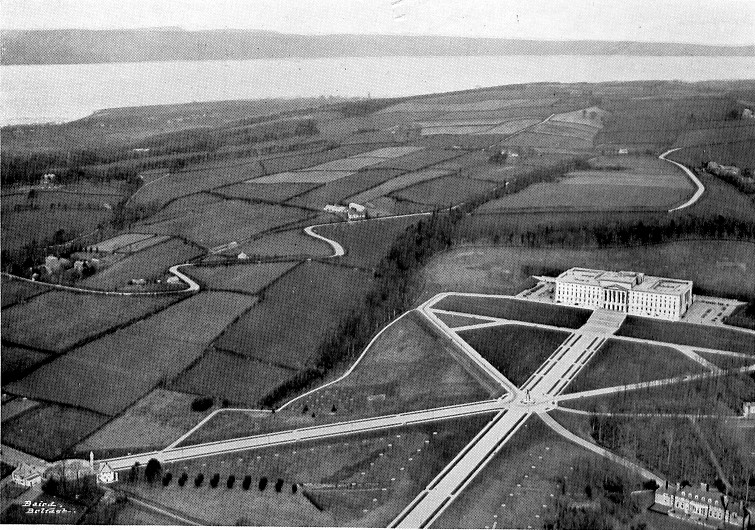 The Parliament Buildings at Stormont shortly after its completion in the early 1930s. Belfast Lough can be seen in the background. 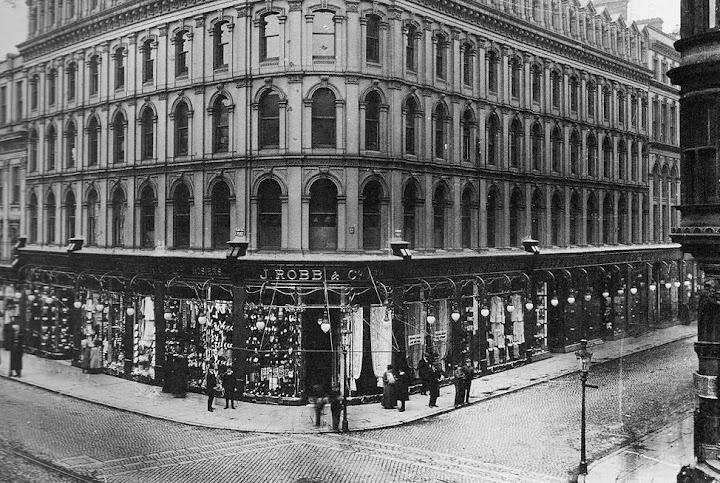 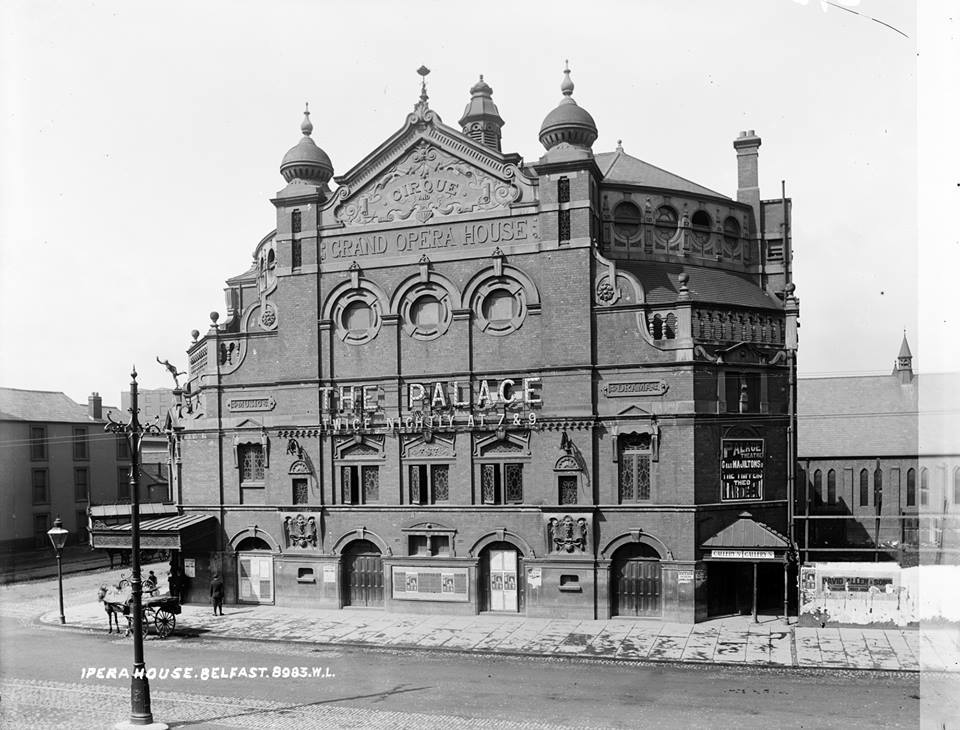 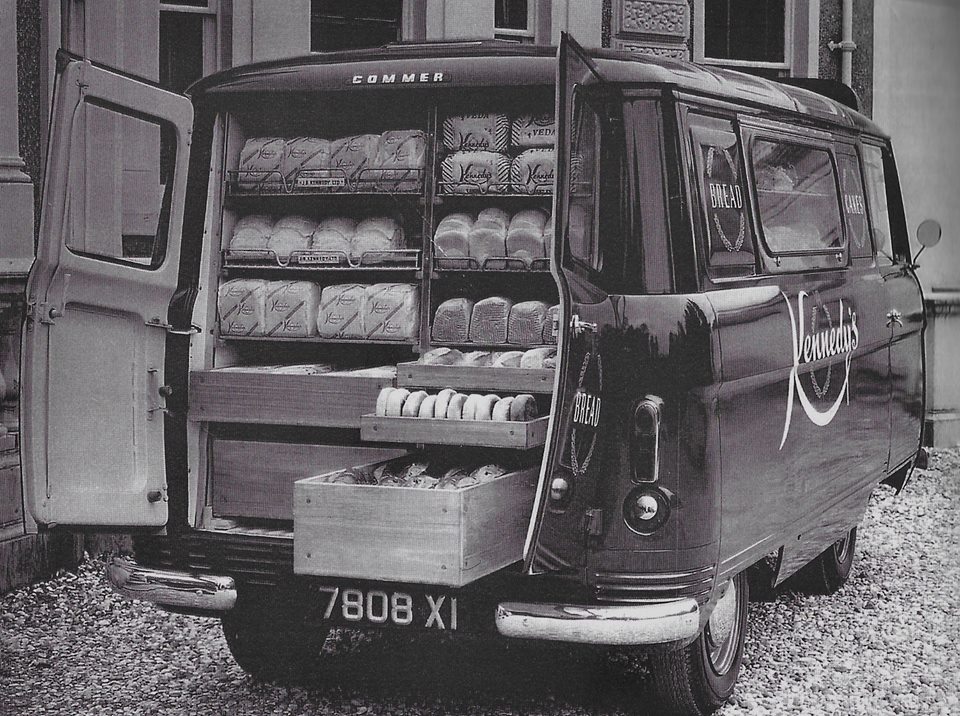 Kennedy’s Bread was a successful supplier of bread. These were in the days when your loaf was delivered to the door! 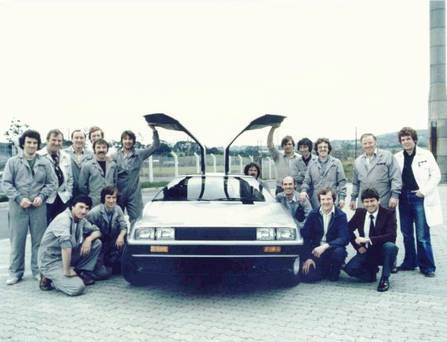 In October 1978, construction of the six-building, 660,000 ft² manufacturing plant began in Northern Ireland and was designed and managed by Brodie and Hawthorn Architects based in Belfast and constructed in 16 months by Farrans McLaughlin & Harvey. Officially known as DMCL (DeLorean Motor Cars, Ltd.), the facility was located in Dunmurry, a suburb of Belfast. The company produced a car, the DMC-12, which gained worldwide attention after it was featured in the popular 1985, 1989, and 1990 films in the Back to the Future movie trilogy. 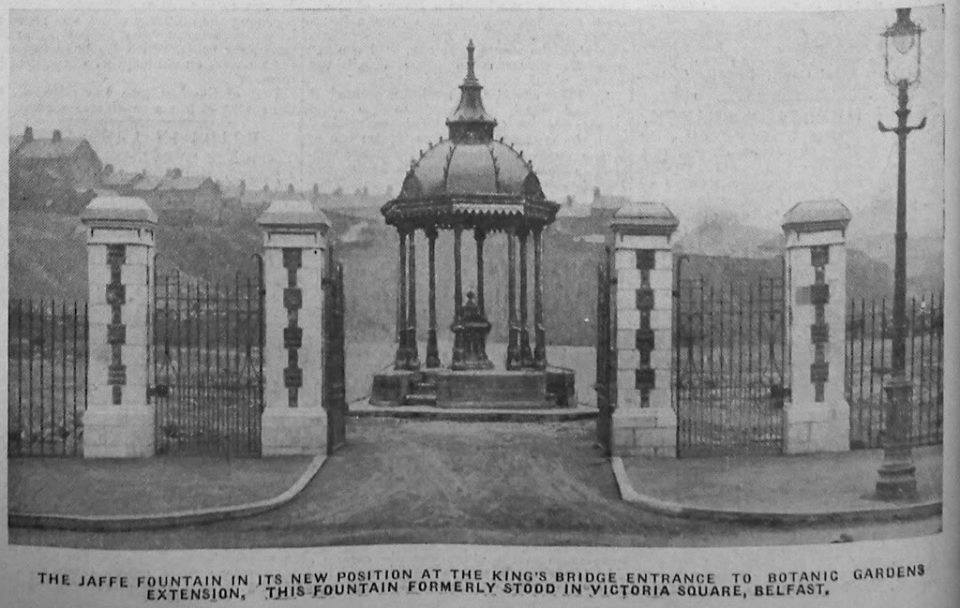 For those of you who often pass this fountain at the entrance to the Victoria Shopping Centre on Victoria Street, here’s a press photograph that reminds us that for almost 75 years (from 1933 to 2007) the fountain was relocated to the gates of the Botanic Gardens close to the Kings Bridge at Stanmillis. Originally placed in the historic Victoria Square in 1874 by Otto Jaffe (later Sir Otto Jaffe – the only Jewish Lord Mayor of Belfast) as a memorial to his father Daniel Joseph Jaffe. It was fully restored to (almost) its original position at Victoria Square in 2008. 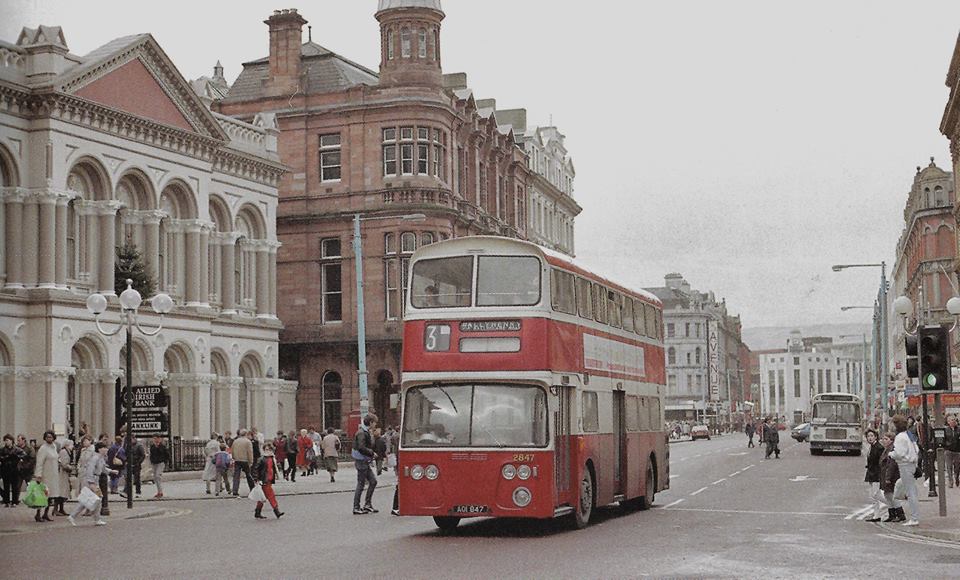 This looks like a fairly ordinary photograph taken at the junction of Royal Avenue and Castle Place, but if you take a closer look, you’ll see how much has changed in the city centre since it was taken. The old Provincial Bank of Ireland (AIB) building has since become a branch of Tesco; the gap site further down Royal Avenue on the left was where the Grand Central Hotel and the Head Office of the GPO used to stand which is now the site of Castlecourt. 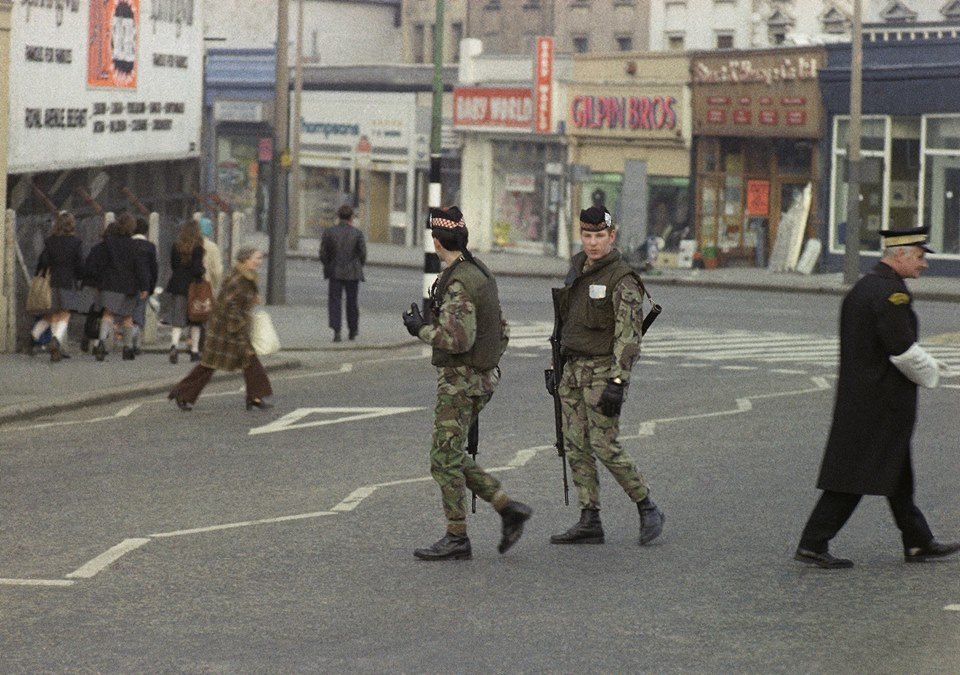 A typical street scene in Belfast City Centre in the 80s, this photo was taken at the junction of the Lisburn Road and Bradbury Place. At the time this photograph was taken, the area was a vibrant shopping area, but many of the shops in the background are now fast food outlets. The old Toll House on the corner of the junction has been demolished and would soon be replaced by student accommodation. “Spuds” was just around the corner and served late night burgers on Bradbury Place for the 30 years It was in existence. 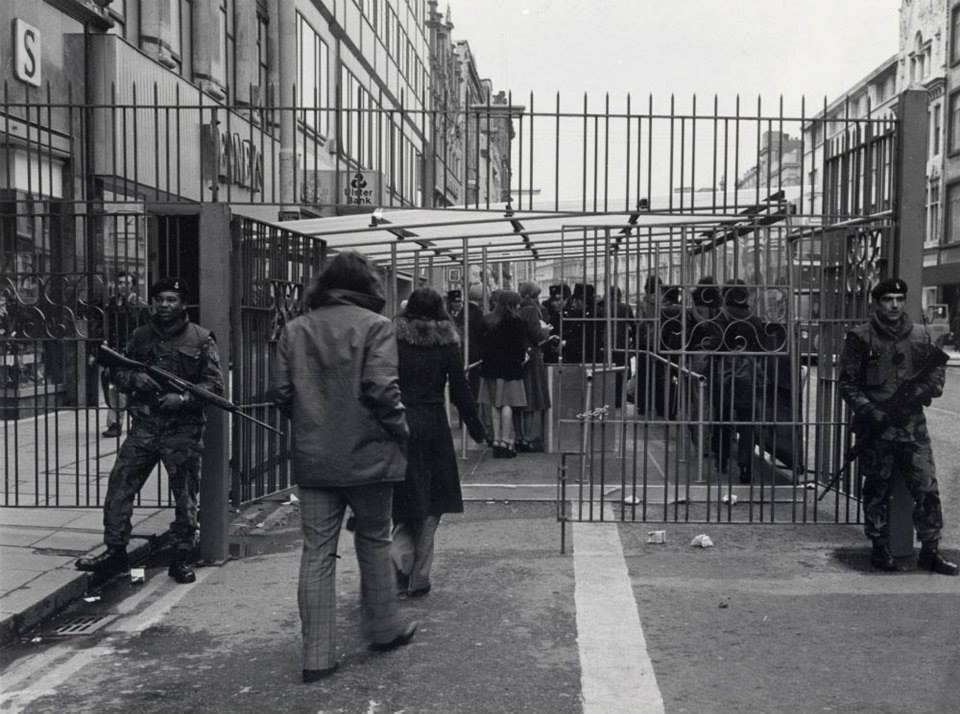 This photograph reminds those of us who were about then, what was almost considered “normal” when going to the shops in the city centre in the seventies. Getting your bags searched before entering the city centre shopping area would seem crazy to young people today, but you just had to get on with it! On the left is the first branch of “Penneys” to open in Northern Ireland – it moved into Brand’s Arcade building after Birdcage Walk closed, but later relocated to much larger premises at The Bank Buildings further down the street and changed its operating name in the UK to “Primark”.

Taken in the days when your bread was delivered to the door. This particular photograph of this amazing fleet of vehicles was taken in Ormeau Park – just across the road from the Ormo Bakery from which the bread was baked and delivered. 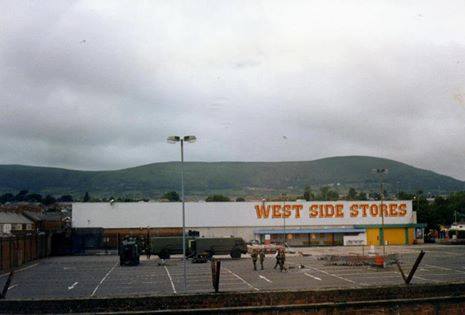 Here’s a building our viewers from the west of the city might remember. West Side Stores, opposite where Celtic Park used to stand which later became Park Centre. West Side Stores was itself built on the site of what used to be Maguire & Patterson’s match factory on the Donegall Road. It used to produce Swan Vestas and Swift and Bo-Peep Matches (who rememebers those?). The site is now occupied by modern housing. 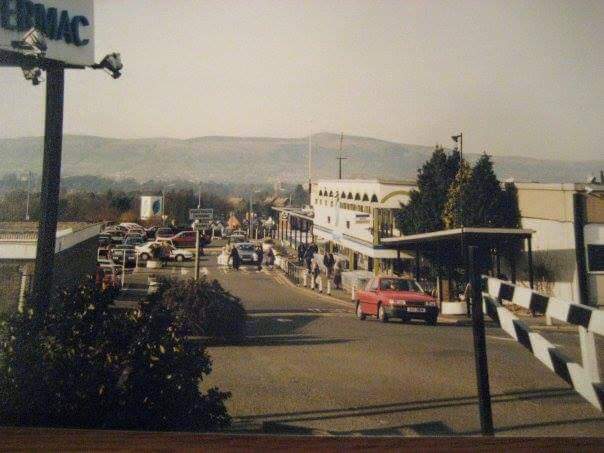 Who remembers getting their weekly shop here? Supermac first opened its doors at Newtownbreda in 1964, and was NI’s first out of town supermarket. It was developed by the Anderson family of Anderson & McAuley and was later demolished to make way for what is now Forrestside. 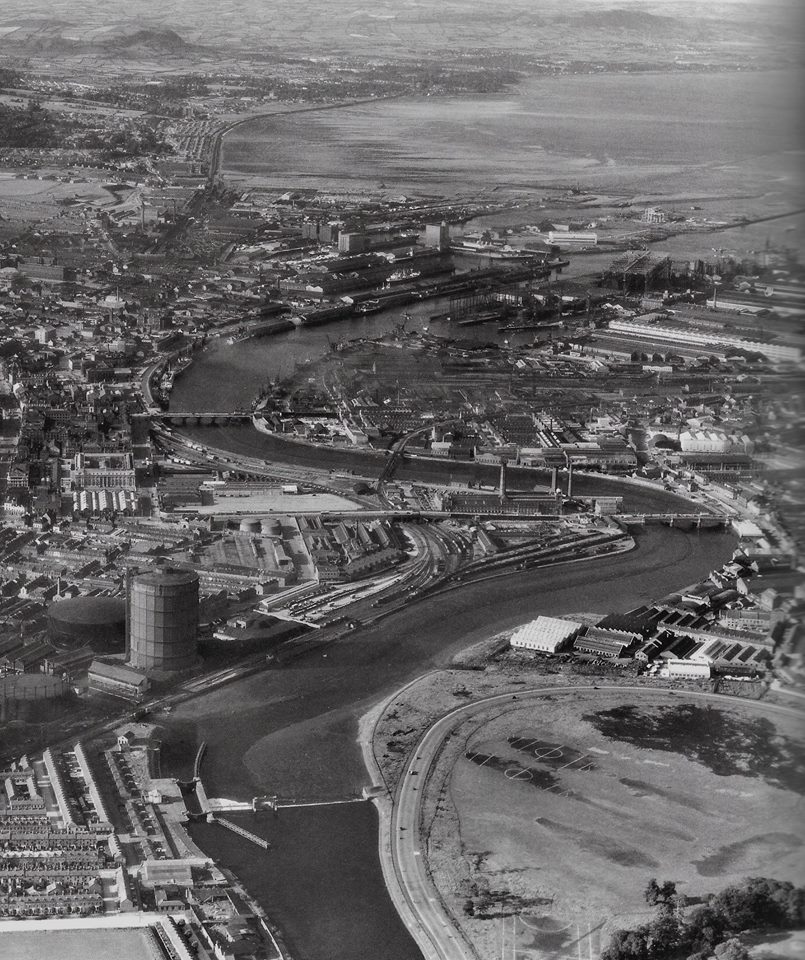 To finish off this article, we will leave you with an aerial view of Belfast in 1953 to appreciate how much this place has changed! Thanks to Public Record Office of Northern Ireland and Old Belfast Photographs for some of the photos and information that inspired this article.