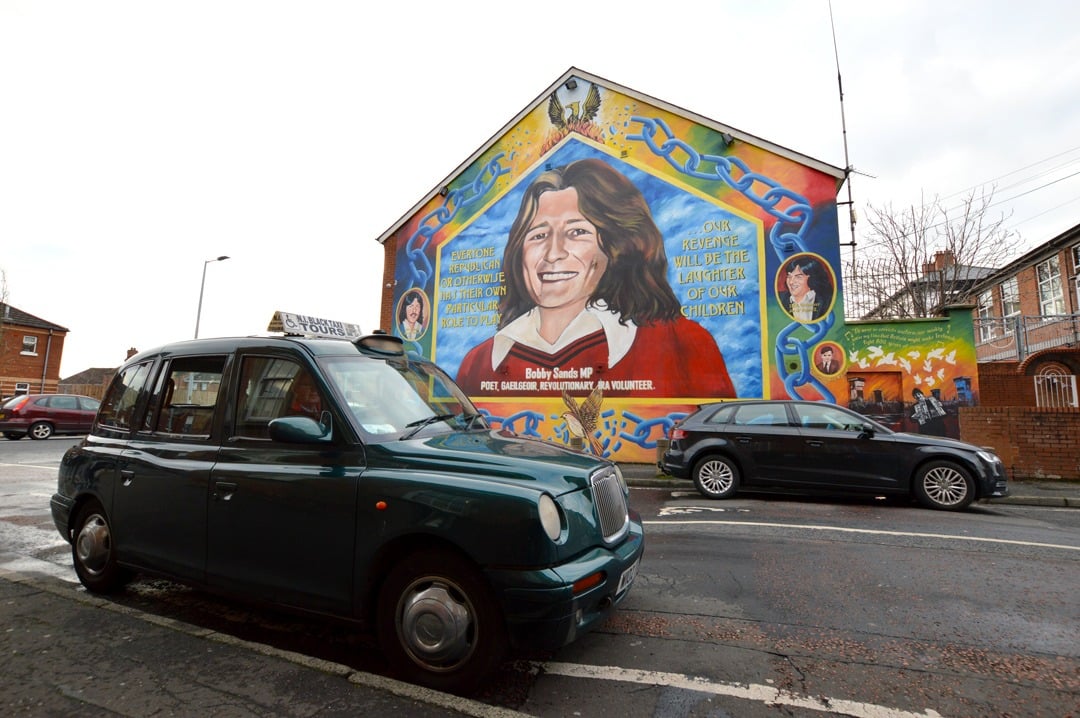 Our trip through Belfast with NI Black Taxi Tours.

Belfast is having a massive resurgence in interest as a tourist destination. The Northern Irish capital has transformed from a conflict zone to a popular weekend trip destination for people from all over Europe.

One of the best things visitors can do in Belfast is a Black Taxi tour through areas of historical significance in Belfast.

The majority of black taxi tours go through two of the best-known areas of Belfast, The Falls and The Shankill.

Both areas were at the forefront of The Troubles, and if you want to understand Belfast, these areas are an excellent place to start.

The tour company that we went with was NI Black Taxi and our tour guide on for the day was Mark who is a very knowledgeable gentleman from Shankill Road.

Mark has been driving a London Hackney cab for over 25 years. He drove a taxi through Belfast during The Troubles and described this as ‘a very dangerous job.’

Mark gave us a compelling and unbiased insight into the history of west Belfast.

Here are five interesting things we experienced on his tour. 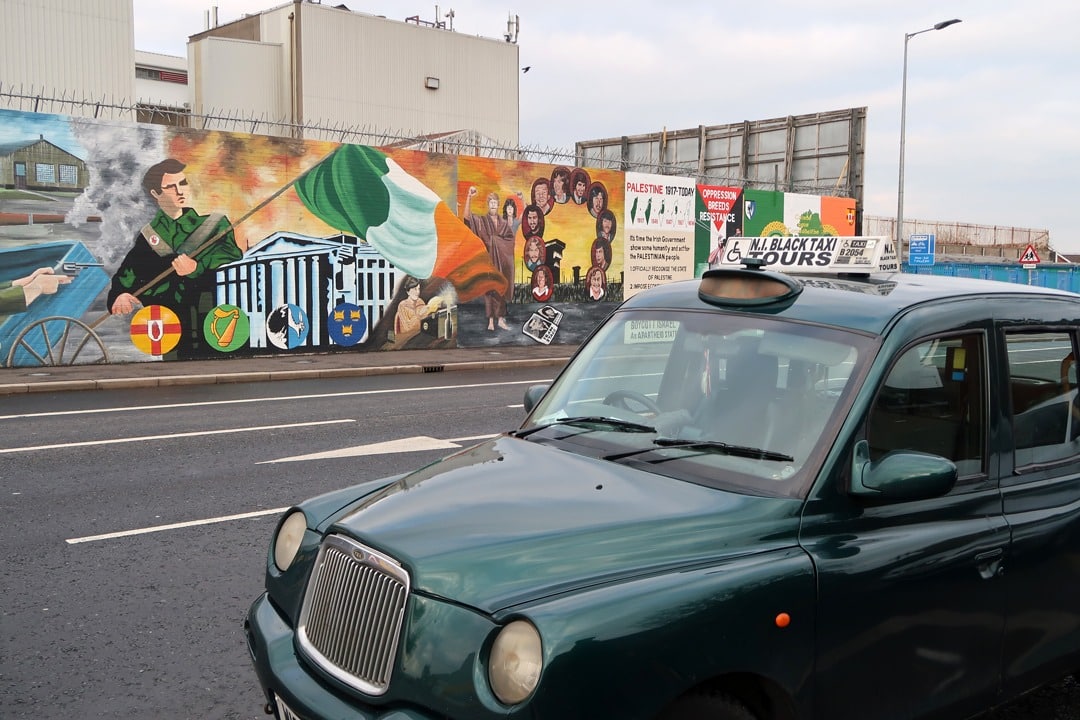 Our tour started off on The Falls Road which is the main road through west Belfast, running from Divis Street in Belfast city centre to Andersonstown in the suburbs.

Its name is synonymous with the republican community in the city, while the neighbouring Shankill Road is predominantly loyalist, separated from the Falls Road by peace lines. 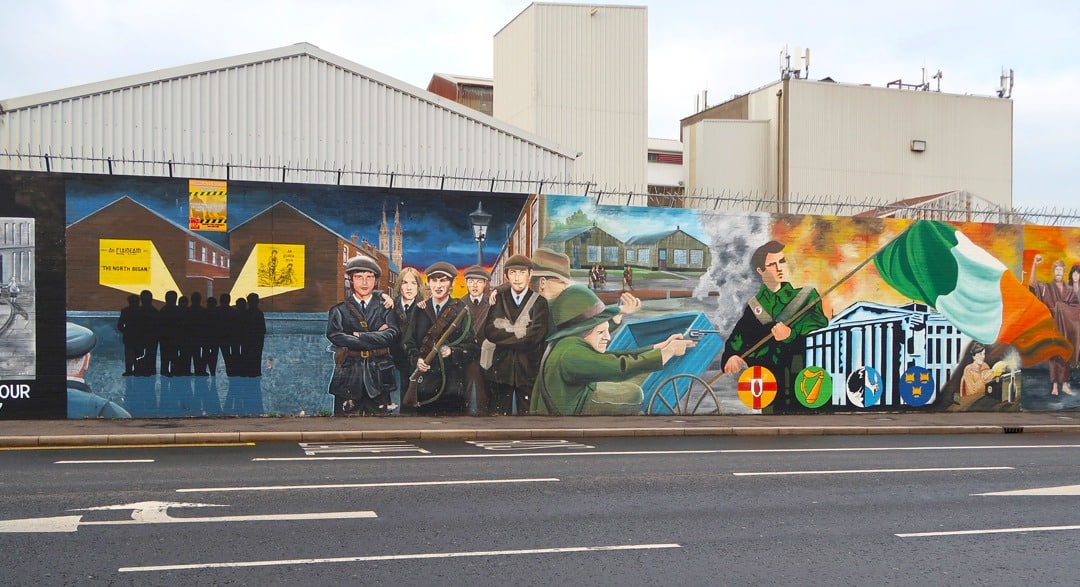 The first stop on our tour was The International Wall on the Falls Road. This colourful and ever-changing wall contains several political and historical paintings.

The art on the wall depicts everything from Ireland’s struggle for independence to the Catalonian independence movement.

The messages on this wall are fairly left-wing, which is representative of the political allegiances of people in this area of Belfast.

On our journey up The Falls Road, we came to the most famous mural in Belfast, The Bobby Sands mural.

Bobby Sands’ story is well-known all over the world, and as a result, there are streets named after him in France and Iran.

However, he is also a very divisive political figure as he was a member of the Provisional Irish Republican Army (The PIRA) who were involved in a bitter three-decade conflict with the British Army and Loyalist Paramilitaries.

The 1981 hunger strike was a showdown between the republican prisoners and the British Prime Minister, Margaret Thatcher.

During the hunger strike, Bobby Sands was elected as a Member of Parliament (an MP) which prompted media interest from around the world.

The strike was called off after ten prisoners had starved themselves to death – including Sands, whose funeral was attended by 100,000 people.

The strike radicalised Irish nationalist politics and was the driving force that helped Sinn Féin to become a mainstream political party.

His mural is the most famous in Belfast and located on the Falls Road on the side of the Sinn Fein offices. 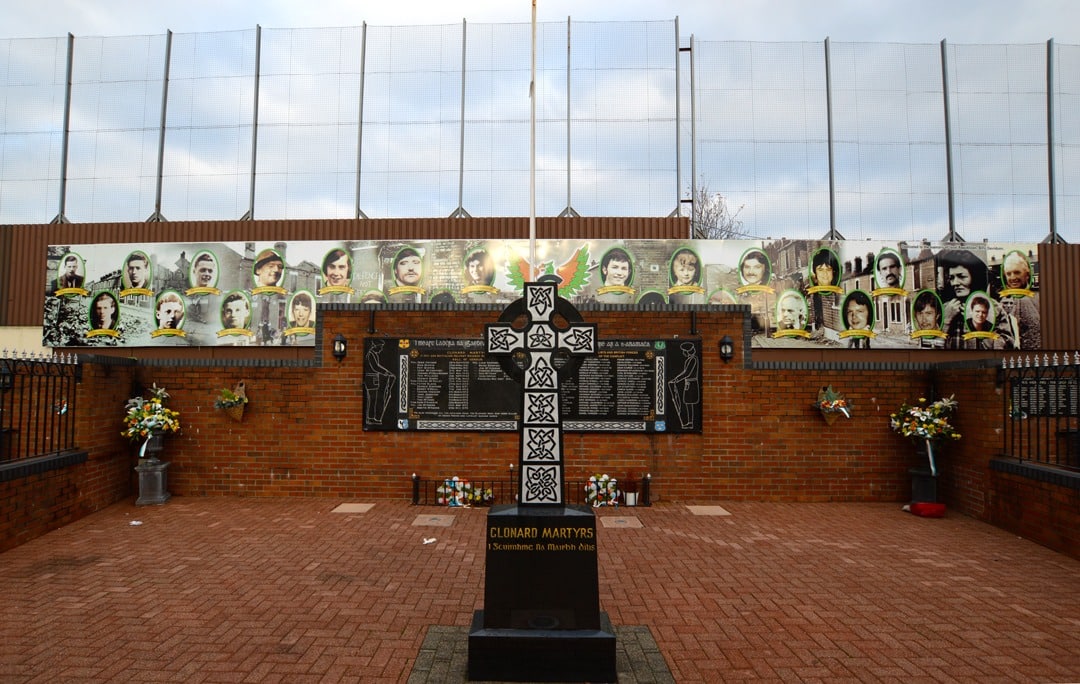 Next, our tour took us to The Clonard Martyrs Memorial Garden which is located on Bombay Street.

This street has seen a fair share of tragedy and this garden is dedicated to the people of this area.

The street itself was burned down in the 1969 Northern Ireland riots, and the Phoenix on the gate represents the street rising from the ashes when it was rebuilt.

The garden contains many names and faces on the wall of people from this area who died during the conflict in Belfast, both Republicans and civilians.

The park is situated between Clonard Monastery and a row of houses protected by metal sheets to prevent objects from being fired over the peace wall. 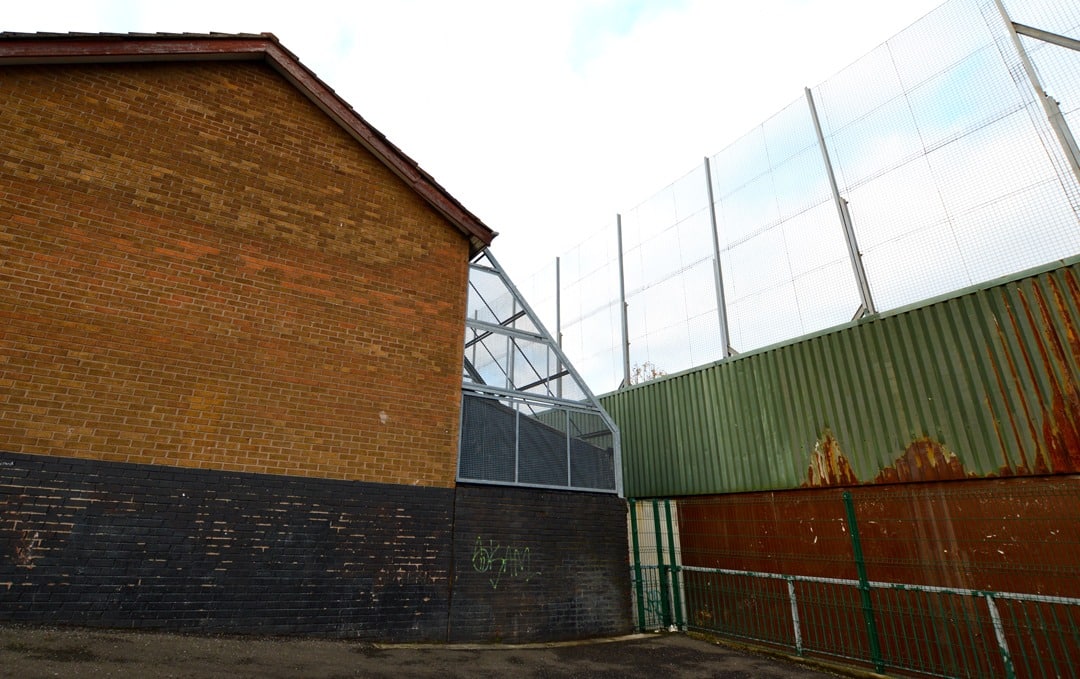 On some of the homes behind the wall, there are cages to prevent thrown objects hitting the houses. Our tour guide told us that many people in the area joke that these are called “Belfast conservatories”.

This is a lighthearted local joke which helps alleviate the uneasiness of a very serious situation. It is crazy to think that people still live like this in 21st Century Belfast. 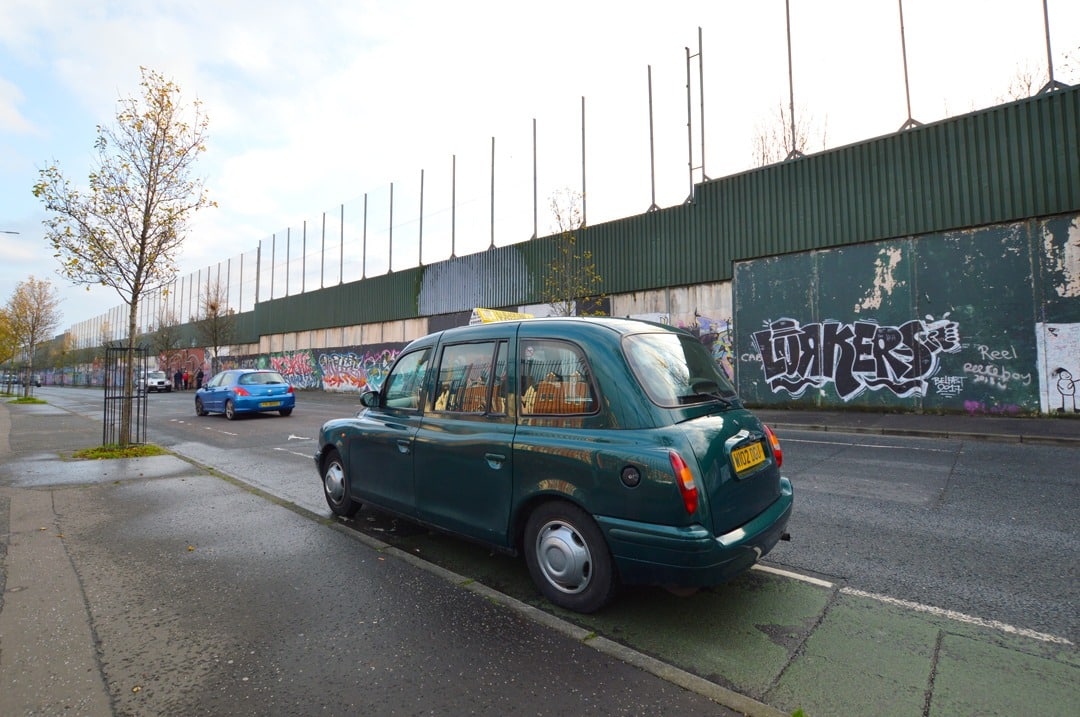 Moving on from Clonard, we travelled through the peace wall and onto the Shankill side of the west Belfast peace wall.

They have been built at urban interface areas in Belfast, Derry, Portadown and elsewhere. The stated purpose of the peace lines is to minimise inter-communal violence between Catholics and Protestants.

The peace lines range in length from a few hundred yards to over three miles (5 km). They may be made of iron, brick, and/or steel, and are up to 25 feet (7.6 m) high. Some have gates in them (sometimes staffed by police) that allow passage during daylight but are closed at night. 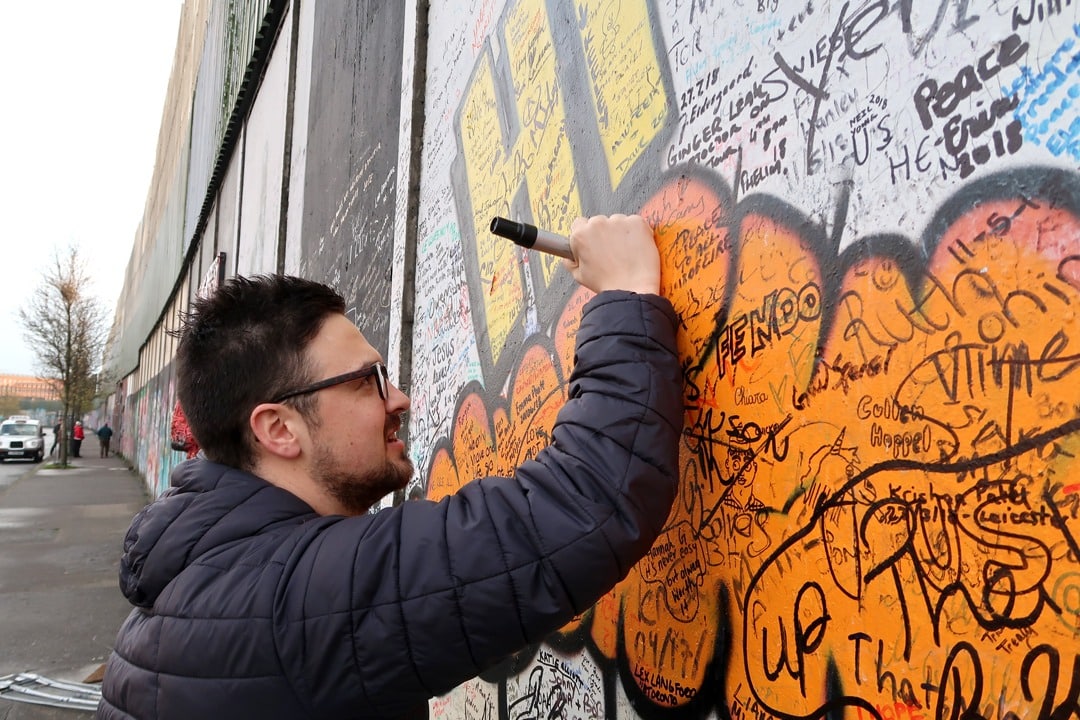 On the tour, we stopped at one of the most famous parts of the wall, between Clonard and the Shankill, where we signed the wall and left our own message of peace and positivity.

5. Murals & Memorials on The Shankill Road 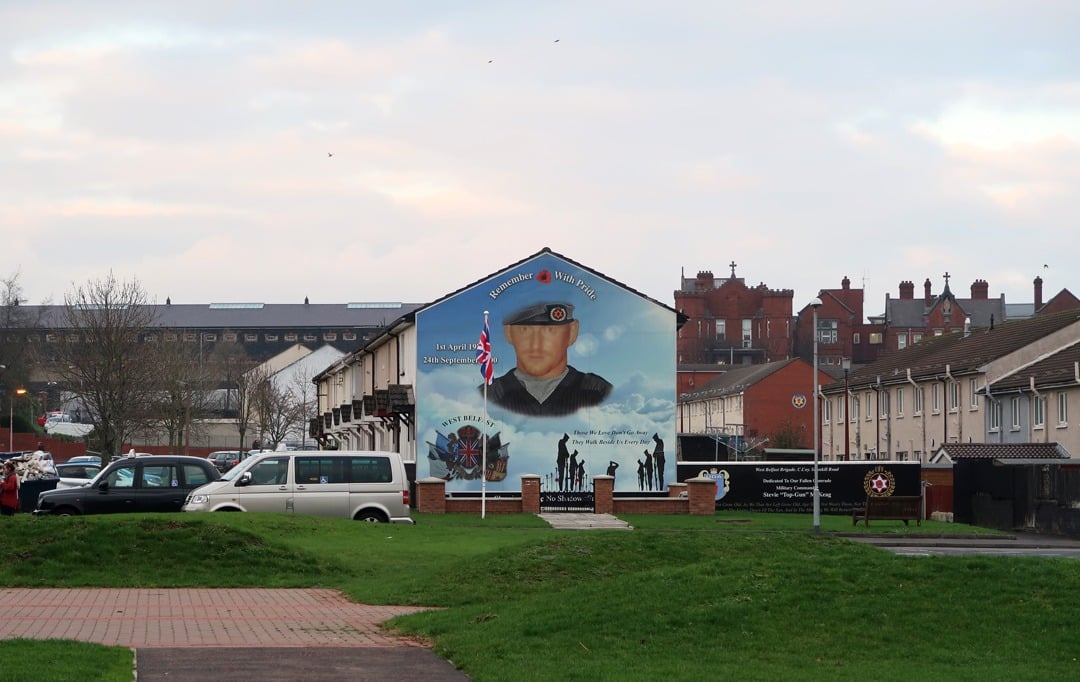 Our last stretch of the tour was through The Shankill Road, a focal point of the Troubles and a predominantly loyalist community.

The Shankill Road is one of the main roads leading through west Belfast. The bottom part of the Shankill runs in parallel to the Falls Road.

This area of Belfast is proudly Loyalist and British which is shown by the flags and murals along the road. 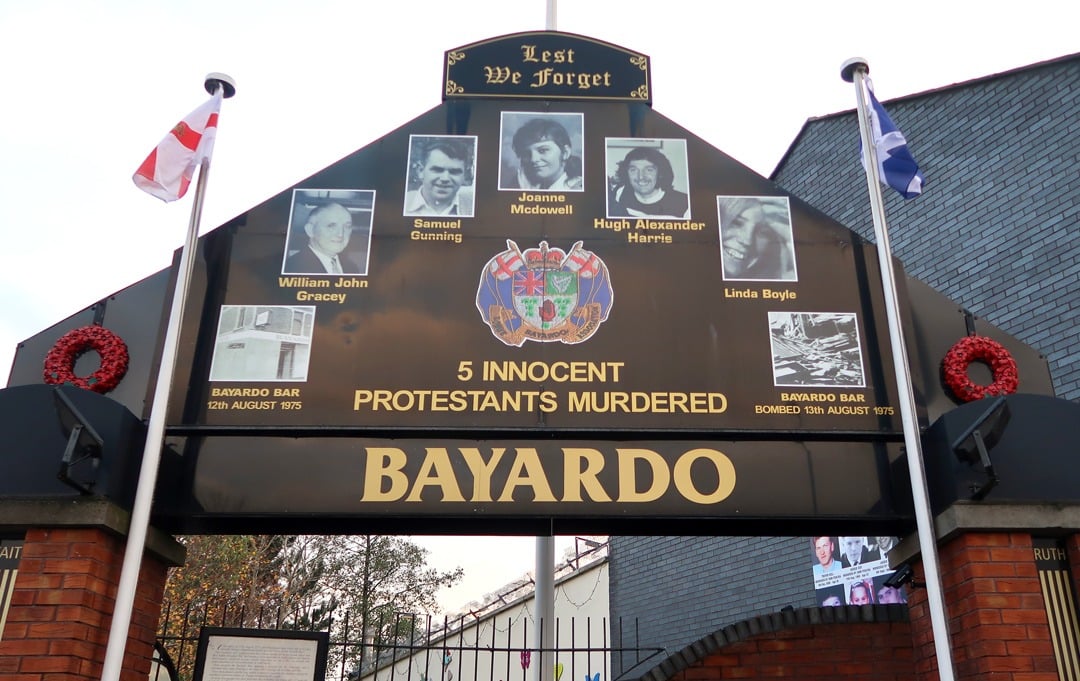 The first place we stopped at on The Shankill Road was a memorial to victims of The Bayardo Bar attack which took place on 13 August 1975.

The attack was committed by a unit of the Provisional Irish Republican Army who launched a bombing and shooting attack on a pub on Aberdeen Street, in the Shankill area.

Four civilians and one UVF member were killed, while more than fifty were injured.

According to journalists Alan Murray and Peter Taylor, it was retaliation for the Miami Showband massacre almost a fortnight earlier, when the popular Dublin-based band were shot dead by the UVF at a fake military checkpoint.

Three members of the IRA were subsequently sentenced to life imprisonment for perpetrating the Bayardo attack.

Our guide Mark echoed the views of many commentators and historians, explaining that a large number of killings during The Troubles were revenge attacks committed by both sides of the community. It was a violent cycle of anger and retaliation. It was a terrible time for all people in Northern Ireland.

Indeed, this tragedy was followed by another wave of sectarian attacks, this time against Catholics.

Two days after the Bayardo Bar attack, a loyalist car bomb exploded without warning on the Falls Road, injuring 35 people.

Then, on the 22nd August 1975, the UVF launched a gun and bomb attack on McGleenan’s Bar in Armagh. The attack was strikingly similar to that at The Bayardo Bar. 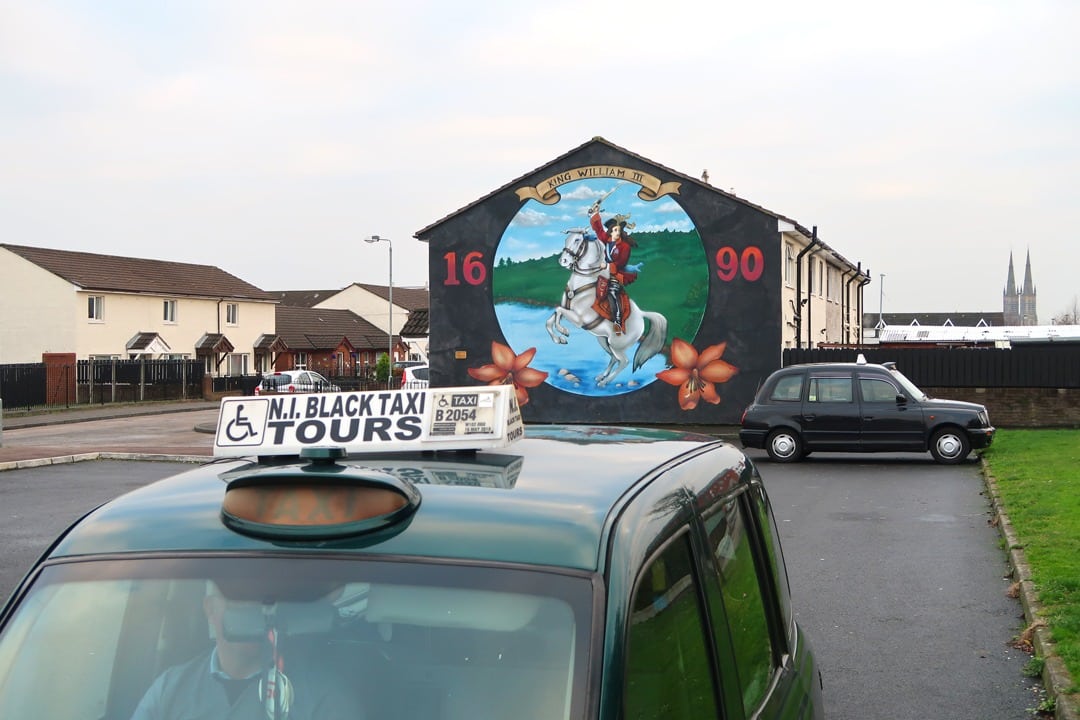 Our tour then finished at the mural of King William of Orange, a hero to the loyalist people of The Shankill Road.

William’s reputation as a staunch Protestant enabled him to take power in Britain when many were fearful of a revival of Catholicism under James.

William’s victory at the Battle of the Boyne in 1690 is still remembered and commemorated every year by loyalists in Northern Ireland and Scotland.

Our tour guide, Mark, is from the Shankill. So, it was fascinating to a local’s insight into the history of the Shankill, and what modern issues are affecting people in this area.

It seems apparent that in spite of the violent and divided history, the everyday problems faced by working class people of the Shankill are a mirror image of the people of The Falls. This was the most important point we took away from this tour.

We loved our black taxi tour and would definitely recommend taking one if you are visiting Belfast.

We’d like to give a big thank you to NI Black Taxi Tours and to our tour guide Mark for an excellent tour. 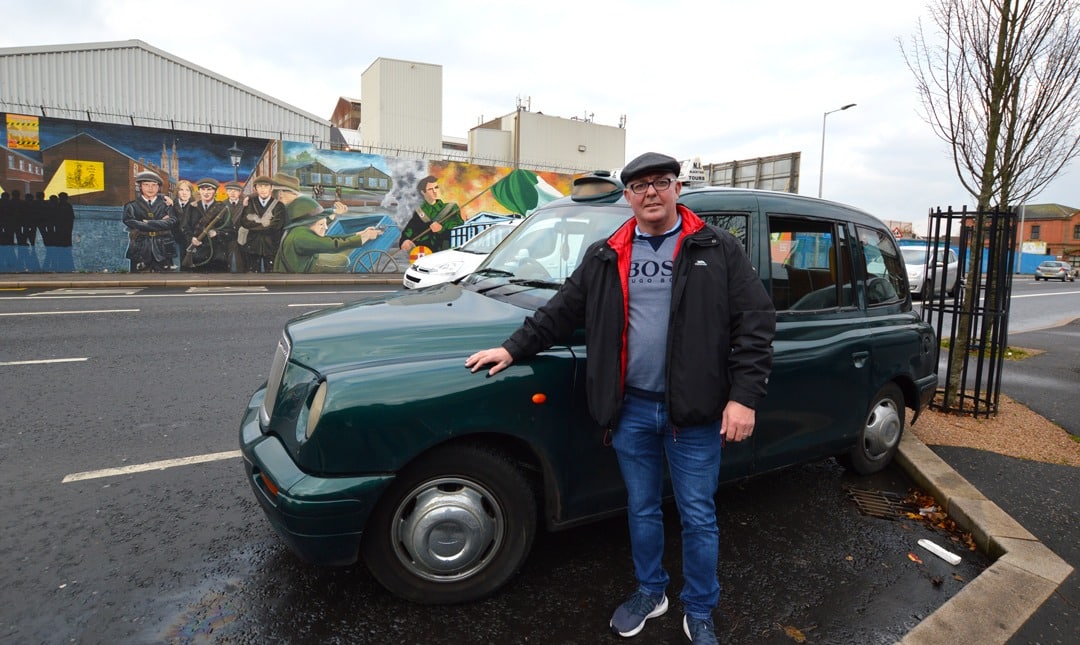 NI Black Taxi Tours has been operating for over 15 years. The company is led by Mark Neil who has been driving a London Hackney cab for over 25 years.

Mark’s family has lived on the same street on the Shankill for generations and he drove a taxi on the Shankill road during the troubles which he describes as a ‘very dangerous job.’

Mark decided to give tours because he felt that people such as himself were the best people to give tours as they have lived through the times of conflict.

All NI Black Taxi Tours’ guides have been born and bred in the streets where the tour takes you. Their guides are from the two sides of the peace wall, from Catholic and Protestant backgrounds.