New to slang in Northern Ireland? Here are 20 Northern Irish phrases and what they mean in plain English.

Every region in the world has its own unique expressions and colloquialisms, and Ireland is no different. Northern Ireland has some loony idioms that anyone from outside the country would probably never understand by themselves, no matter how proficient you are at speaking English.

“Catch yourself on, it’s Baltic outside, so what do you need a poke for? You’re such a melter!”

Did that collection of phrases go completely over your head?

Not to worry; we’ve compiled a list of our favourite Northern Irish phrases (and what they mean in plain English) to make sure you can fully understand the locals — or even imitate them if you’re feeling brave.

When you hear this Northern Irish expression, you might think of the Baltic Sea, and you’d be along the right lines (sort of). This colloquial expression is referring to how cold something is.

This has nothing to do with steam coming out of your body, thankfully. You’d actually use this phrase to describe how drunk you are.

This is another way of telling someone to shut up. It’s a bit rude, although it’s often used very informally between friends.

17. Scundered/scunnered — different meanings depending on your location

This Northern Irish phrase has split meanings and gets pronounced a bit differently depending on where you’re from.

It can mean either embarrassed (scundered, in Belfast and elsewhere) or depressed (scunnered, in the Ballymena area).

Example 1: I fell getting on the bus; I was scundered.

16. Boking/boke/boked — not the most pleasant thing

This verb means to be sick. You’ll hear young people using this word a lot — it’s an easy one to adopt into your everyday dictionary.

Example: I had a horrible curry last night; I boked everywhere!

Northern Irish people have a tendency to describe everything as “wee.”

It’s a prefix they can add in front of pretty much any word, and it’s one of their most versatile colloquialisms. It’s generally used as a form of endearment to make a serious conversation more informal.

Example 2: If you’re feeling warm, you should take your wee coat off.

This Northern Irish phrase is simple — it means to go for an ice cream. It’s more typical of the older generation in Ireland.

Example: The sun is shining; I might go for a poke.

Bit of a weird one, but it’s used in conversation to exaggerate one’s disbelief at something.

Example: They told me my package wouldn’t be delivered for another two weeks — here’s me wha?

This essentially means, “fine, not a problem.”

You would typically say it in response to someone after they’ve asked a question or told you something.

Hello, how are you? This is one of those Northern Irish phrases you’ll hear quite a lot if you go to Belfast, and you’d be confused as to what it means without this explanation.

A silly person. Technically you could just call someone an eejit, but the “buck” in front adds more of an emphasis and conveys the person in question as even more of a fool.

You’d say this Northern Irish phrase if you had been jarred by something or if you received bad news.

Example: Boys a dear, the food in this restaurant is dreadful.

Note that people in Northern Ireland don’t tend to pronounce the “-ing” at the end of words, so words like doing or working become doin’ and workin’. The same goes for bogging, which becomes boggin’, and it means disgusting.

Example: Those shoes are boggin’.

Don’t be alarmed by number seven on our list of Northern Irish phrases. People who say this are not trying to kill you; they’re just offering to give you a lift in their car.

In Northern Ireland, this slang word is a way of positively describing someone or something. If you’re described as parful, take it as a very high compliment.

Example 1: Those chocolates were parful!

Thon replaces “the” or “those” in a sentence and can be used to describe pretty much anything.

4. Some yoke — pretty much anything

Example: Thanks mate, you’re some yoke.

A yoke is a person or a thing. To be described as some yoke means you’re an awesome person.

Also known as a chav in the UK, a milly is one of the Northern Irish phrases that is a derogative term for a female who stereotypically wears tracksuits, has a fake tan, and behaves aggressively.

Example: She’s a big milly, but she’s still my friend.

2. Catch yourself on — wise up

This is a more informal way of telling someone to pull themselves together or wise up if they’ve said something that seems ridiculous or foolish.

Jack: I don’t want to go to work today.

Mary: Catch yourself on.

This Northern Irish expression is another way of telling someone that they’re annoying. The idea is that they are “melting” one’s head by being so annoying, hence being a “melter.”

he top 20 Northern Irish phrases! Try to mix these expressions together and drop them into conversation with a few Irishmen—you’ll blend right in with the locals in no time. 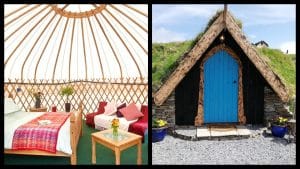 James Lavery grew up satiating his lust for travel with trips around the various cities and coastal regions of Ireland. Although he has since ventured far and wide for bigger bites of culture, he continues to sing golden praises of the Emerald Isle wherever he goes. When he isn't geeking over TV sitcom Friends or Disney films, James is writing or designing blog posts for numerous companies all over the UK, Ireland, and further afield.
All Posts by Author