The Titanic Belfast is the world’s largest Titanic visitor experience and must-see attraction in Northern Ireland!

Titanic Belfast is located within the heart of the Titanic Quarter, just a short walk from Belfast’s city centre.

We recently visited the Titanic Belfast and took a self-guided tour through the Visitor Centre.

We were astounded by the number of amazing rooms this building packs in. You really would not know it by looking from the outside. It is a fantastic attraction and definitely one of the best museums in Ireland!

On our visit, we learned a number of interesting things about the Titanic. Here are 10 crazy facts we learned.

1. Titanic was the largest moving object ever built 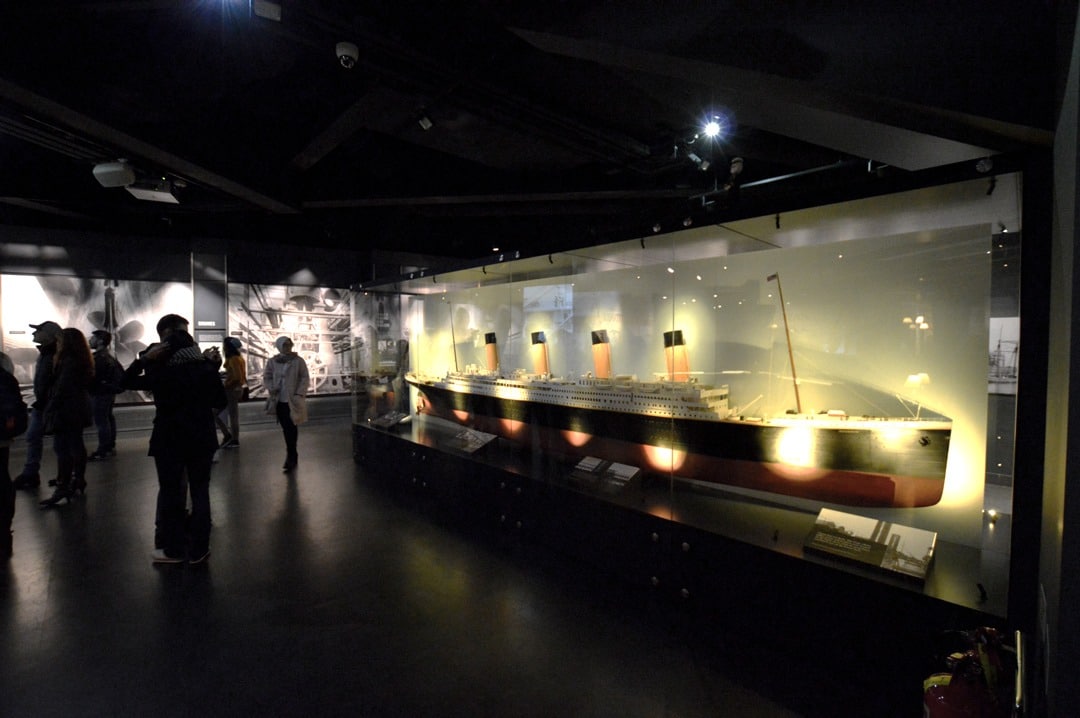 The New York Tribune ran a headline on Sunday, November 27, 1910, asking the question: ‘How can we dock this marine monster when she reaches the port of New York?’

It showed an illustration of Titanic with the famous Halve Maen “Half Moon”—the Dutch ship that sailed into New York Harbor in 1609—wholly contained within Titanic’s hull.

Could people in the Edwardian era imagine that even Titanic would be dwarfed by passenger cruise ships of the future? 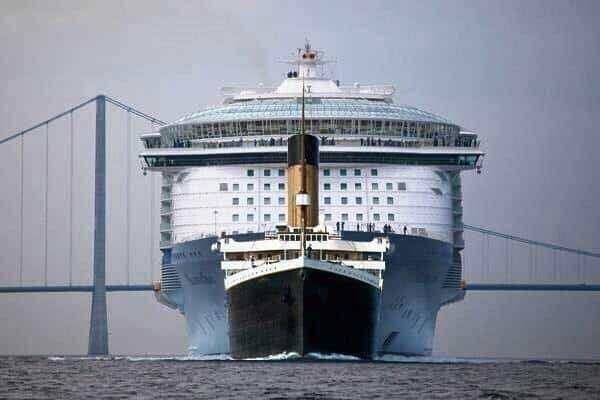 Today’s largest cruise ships—the Royal Caribbean’s Oasis of the Seas and sister ship Allure of the Seas are both 1187 ft (362 m) in length and reach 213 ft (65 m) above the waterline.

2. One of Titanic’s funnels was fake 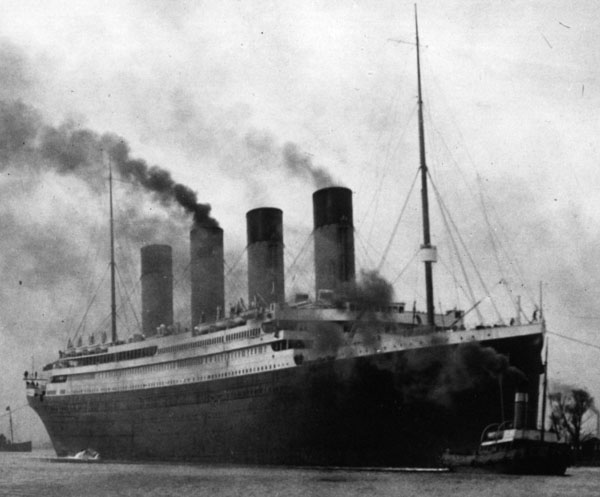 Only three of Titanic’s four funnels were functional—the fourth was a dummy installed because it made the ship look more beautiful and was made into a ventilation shaft for the kitchen.

The first three smokestacks were actually connected to the furnaces that produced the smoke, but the fourth one was not.

The fourth stack functioned mainly as an air vent and as a way to add some symmetry to the ship’s overall look.

Imagine you are the Titanic’s designer. Which looks better—3 or 4 funnels?

3. The Titanic’s interior was based on the Ritz Hotel 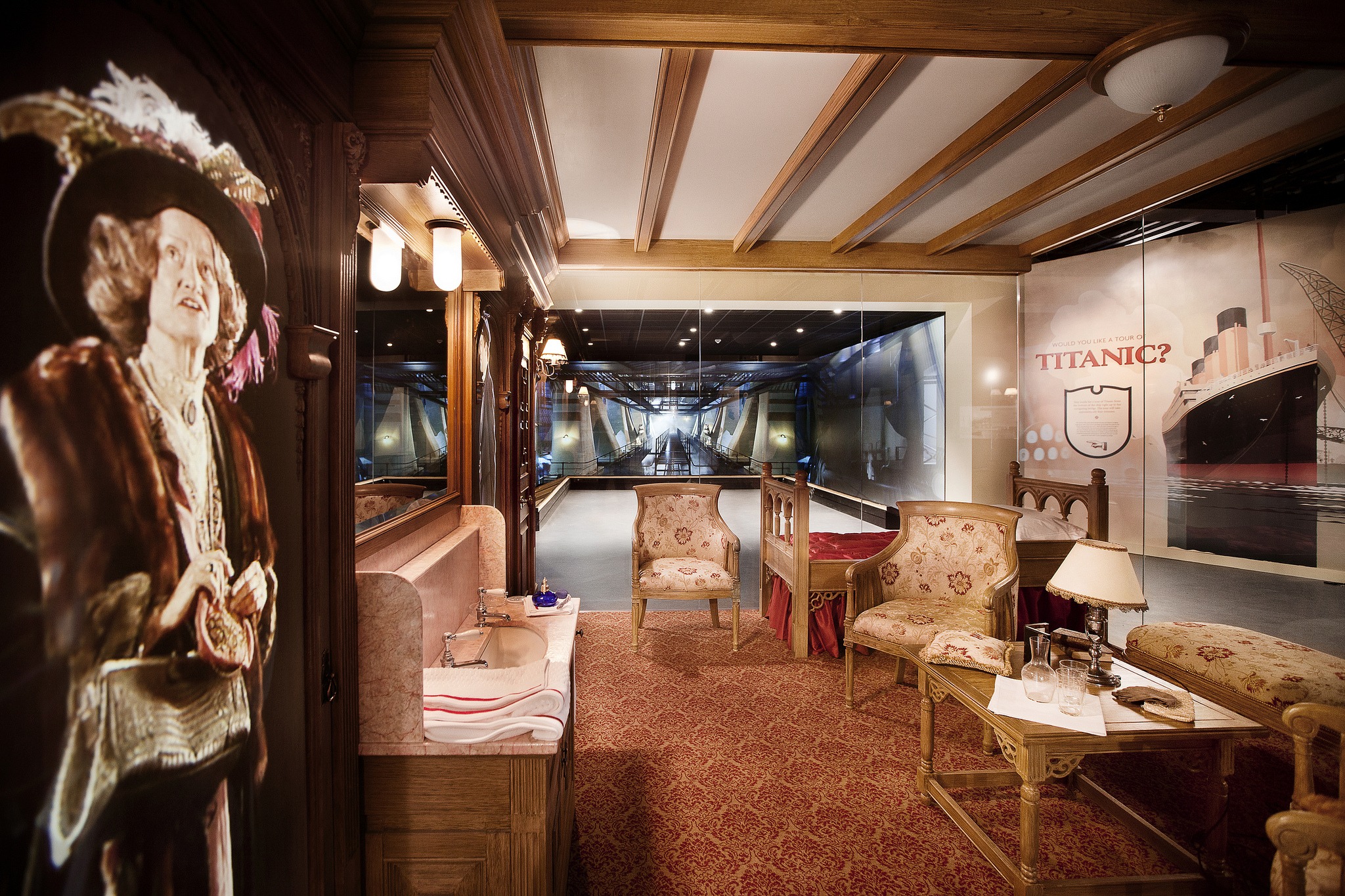 The interior of the Titanic was modelled after the Ritz Hotel, with first-class cabins finished in the Empire style.

Aiming to convey the aura of a floating hotel, it was intended for passengers to forget they were on board ship, and feel as though they were in a hall of a great house on shore.

4. The Titanic Belfast has the same capacity as the Titanic 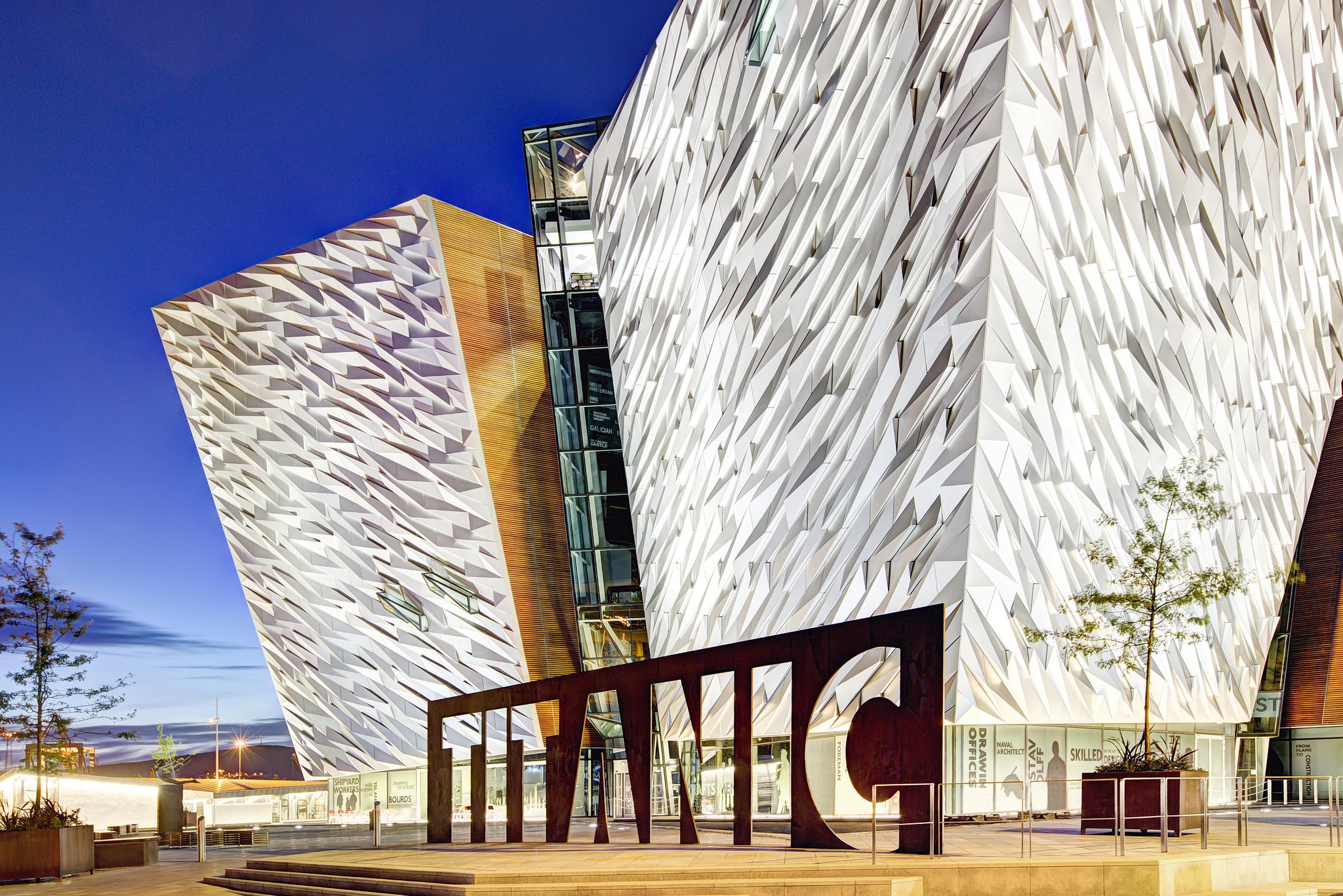 Believe it or not, The Titanic Belfast can hold over 3,547 visitors at any one time. This number is the same number as the capacity of Titanic!

5. Did a novel predict the Titanic sinking 14 years previously? 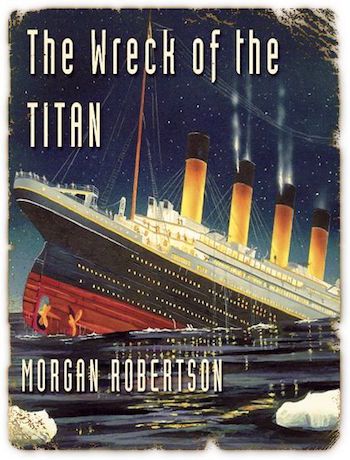 In 1898 (14 years before the Titanic sank), American author Morgan Robertson wrote a novella titled ‘The Wreck of the Titan.’

The book was about a fictional ocean liner that sinks due to a collision with an iceberg. In the book, the ship is described as being “unsinkable” and doesn’t have enough lifeboats for everyone onboard.

6. Another ship was closer and could have saved more people 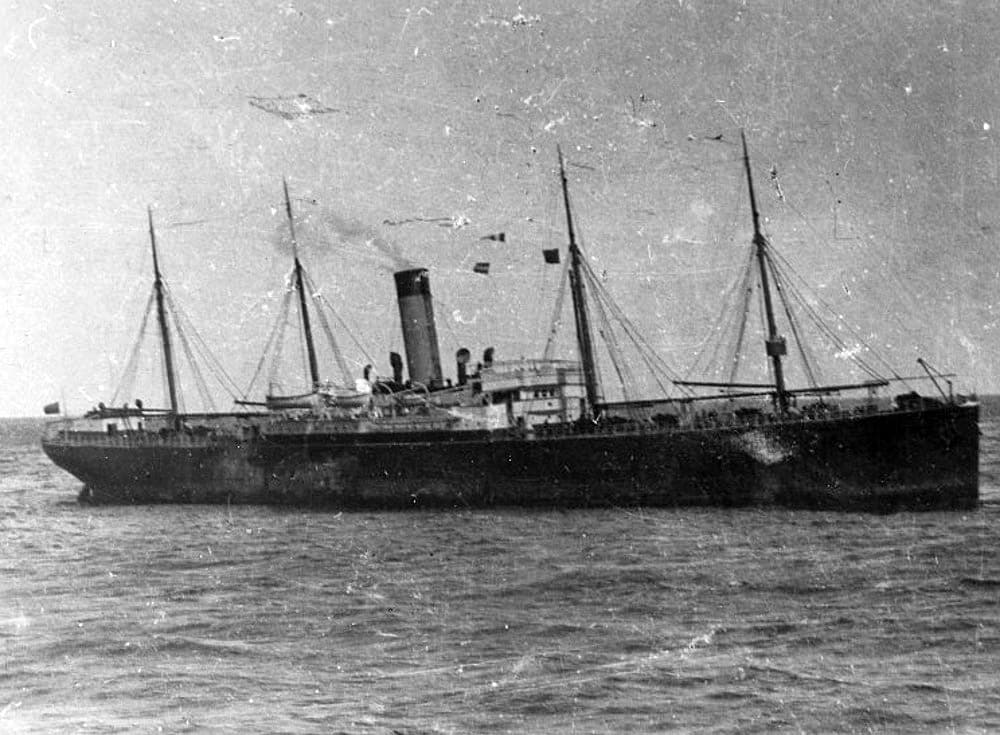 When the Titanic began sending out distress signals, the Californian, rather than the Carpathia, was the closest ship. However, the Californian did not respond until it was much too late to help.

These were the distress flares sent up from the Titanic and they immediately woke up their captain to tell him. Unfortunately, the captain issued no orders.

Since the ship’s wireless operator had already gone to bed as well, the Californian was unaware of any distress signals from the Titanic until the morning. By then, the Carpathia had already picked up all of the survivors.

The United States Senate inquiry and British Wreck Commissioner’s inquiry into the sinking both concluded that the Californian could have saved many or all of the lives that were lost, had a prompt response been mounted to the Titanic’s distress rockets.

The U.S. Senate inquiry was particularly critical of the vessel’s Captain, Stanley Lord, calling his inaction during the disaster “reprehensible”.

7. No-one Knows All Who Died on the Titanic

Although the official number of the dead on the Titanic was 1,503 (of the 2,208 on board, there were 705 survivors), over a hundred unidentified bodies were buried in Fairview Lawn cemetery in Halifax, Nova Scotia.

Many people traveled under false names, and from so many different places, it proved impossible to identify even the recovered bodies.

Sidney Leslie Goodwin, a 19-month-old boy buried under the marker “unknown child” was identified in 2008, after extensive DNA tests and a worldwide genealogical search.

8. A drunk guy was one of the only survivors!

Charles Joughin was the chief baker on the ship. He survived the sinking in the most incredible fashion.

After the ship struck the iceberg and began sinking, everyone was panicking. While this was happening, Joughin was busy drinking all the whiskey he could find from the ship’s liqueur storage to prepare himself for the cold water.

After he had enough drink, Joughin began tossing chairs overboard to be used as flotation devices. As the ship went down, he said he “rode it down as if it were an elevator.” He then spent several hours in the freezing cold water and lived to tell the tale.

9. The famous violin played onboard the Titanic was recovered from the sea

The violin played by Wallace Hartley was thought to have been lost in the sinking, but in 2006, a woman found it in her attic.

After seven years of testing, researchers determined that it was, in fact, the actual violin upon which Hartley famously played “Nearer, My God, to Thee” as the Titanic sank.

Sadly, the violin is not in the Titanic Experience in Belfast, but to a private owner. The violin was sold in 2013 for £900,000 in just 10 minutes at auction in Wiltshire.

The violin was made world famous by this scene in the movie:

10. You can have a pint in the room where the Titanic was drawn up! 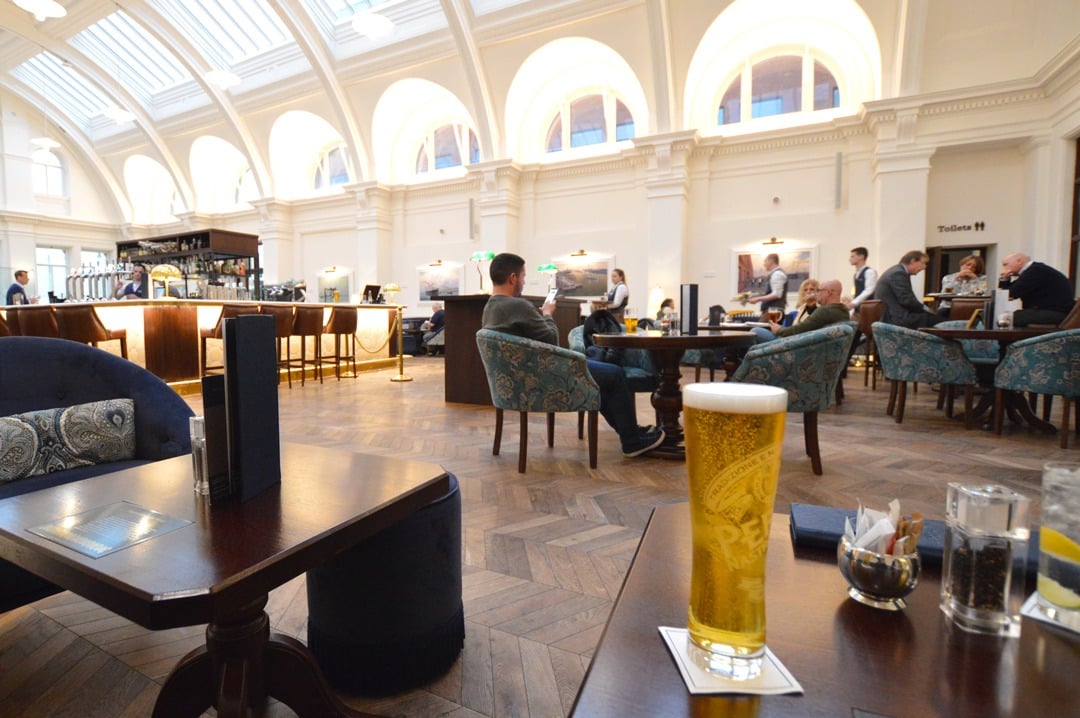 After our tour at the Titanic Belfast, we went next door to the Titanic Hotel Belfast which is located in the former headquarters of Harland & Wolff, builders of Titanic.

In this hotel is Drawing Office Two, which is a bar area with a spectacular three-storey high barrel-vaulted ceiling, is now the vibrant heart of the hotel.

Here, you can enjoy a drink and food in this breathtaking room is where many of the world’s most famous ocean liners, including RMS Titanic, were painstakingly designed!

On top of that, you can actually stay here overnight as a guest in the hotel! Hopefully, someday we will be lucky enough to stay and tell you all about it! We’ve added it to our Bucket List!

About the Titanic Belfast 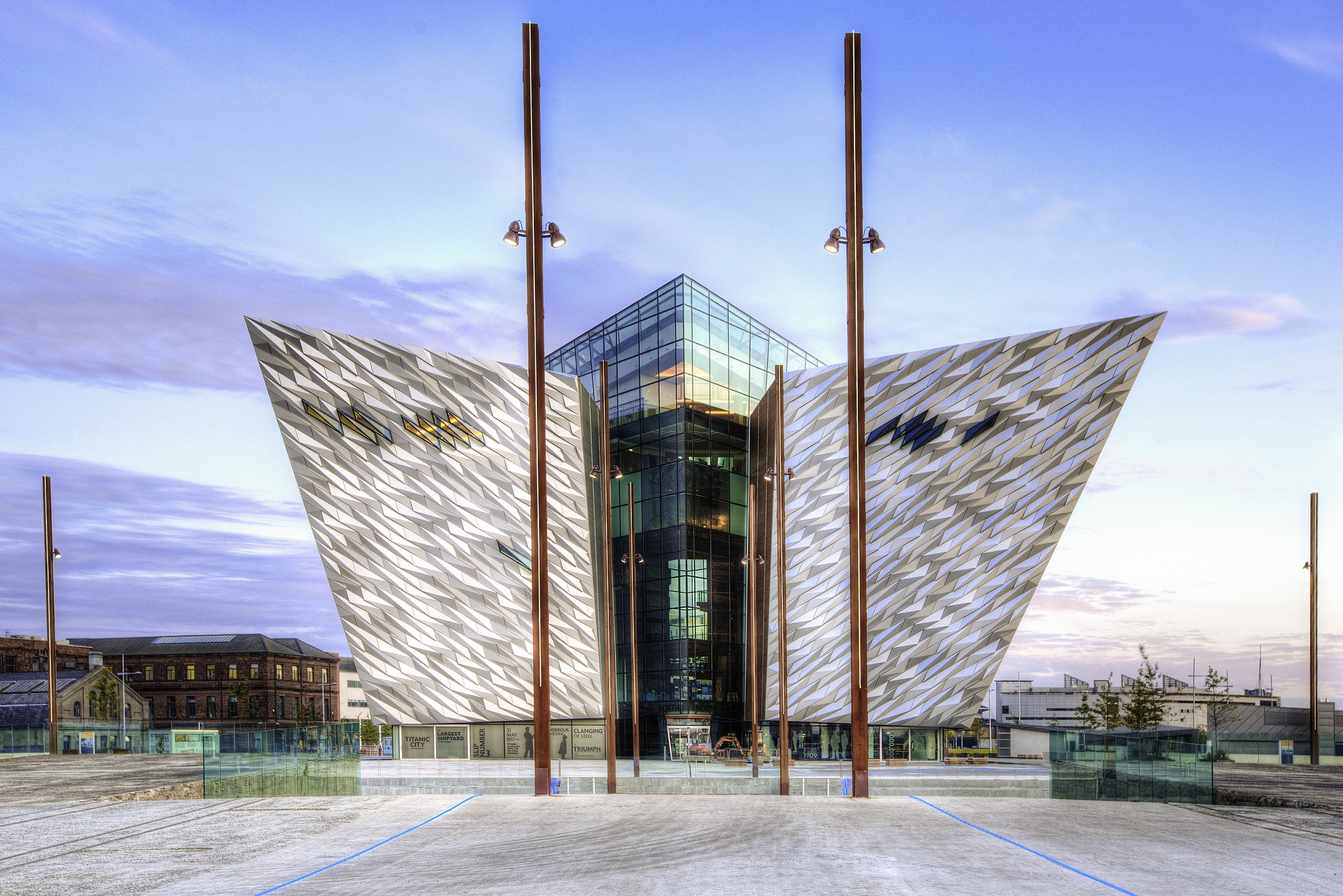 Titanic Belfast, the world’s largest Titanic visitor experience, is located on the spot where the famous ship was designed and launched.

It is an iconic six-floor building featuring nine interpretive and interactive galleries that explore the sights, sounds, smells and stories of Titanic, as well as the City and people which made her, located beside the Titanic Slipways, the Harland and Wolff Drawing Offices and Hamilton Graving Dock – the very place where Titanic was designed, built and launched in 1912. 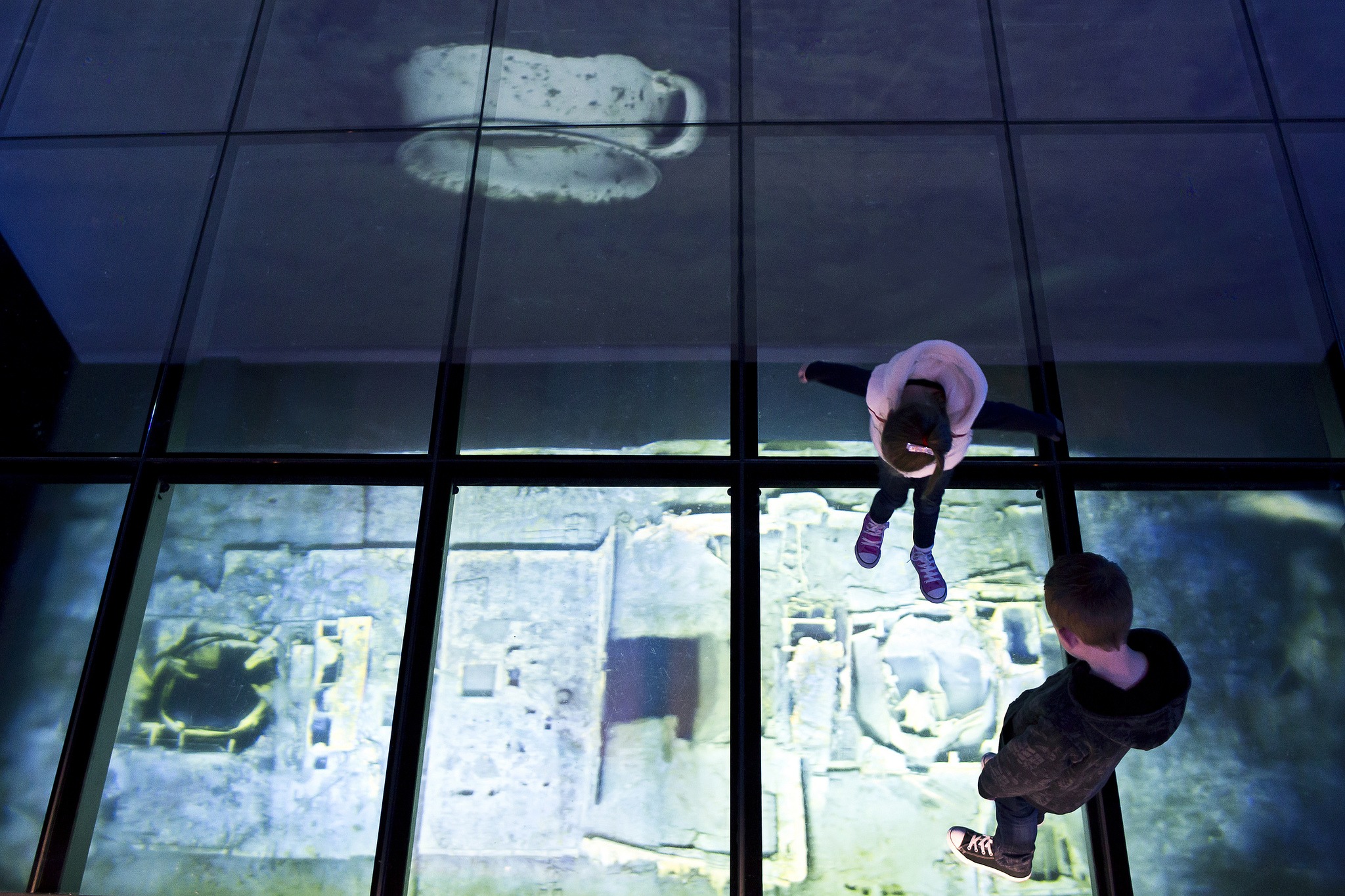 In 2016, it was voted the World’s Leading Tourist Attraction, beating off stiff competition from Ferrari World Abu Dhabi, the Las Vegas Strip, USA, Machu Picchu, Peru and Guinness Storehouse, Ireland at the World Travel Awards. Described by the Guardian as “an inspiring testament to the Titanic and the city that built it”, the critically-acclaimed Titanic Experience is a must-see for visitors in 2018 and beyond.

You can purchase tickets for Titanic Belfast on the day of your tour at the museum.

Tickets for Titanic Belfast are based on a timed ticketing with slots available every 15 minutes throughout opening times.

7 days in Ireland: the ultimate one week Ireland itinerary

Send this to a friend