After being disappointed when a statue of late Dubliners singer Luke Kelly failed to be erected in Dublin a while ago, Kelly’s family, friends and fans can now take heart and joy: two statues are now being planned.

Once they are on their plinths, one wonders if the joy will turn to consternation when, like most other Dublin statues, Kelly’s will acquire some less than respectful–if doubtless humorous–nicknames.

In Dublin, statues are often used as landmarks, to point visitors to their destinations. So, if you’re planning a Dublin visit, it would be as well to learn the names and nicknames for many of Dublin’s statues. You’re far more likely to be told by the locals that O’Neill’s Pub & Kitchen is “near the dish with the fish” than that it is close to the corners of Suffolk Street and Church Lane. Here, then, ten famous statues with local nicknames for them. Be warned, some are very politically incorrect and we had nothing to do with their naming! 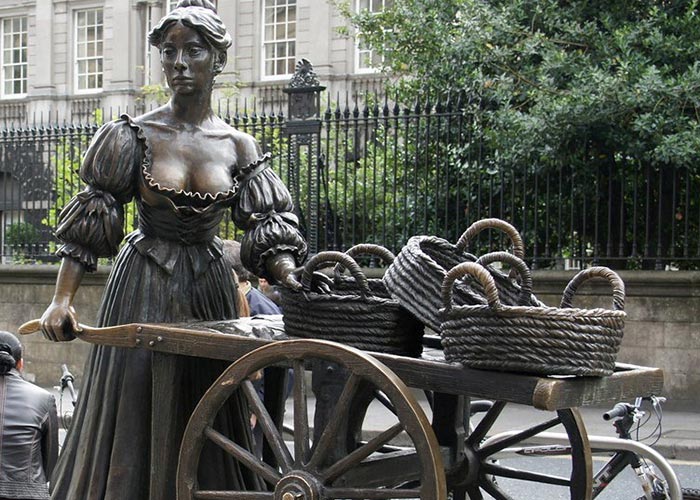 The Molly Malone statue once graced busy Grafton Street, very appropriate with all the street’s shops. But now Molly hawks her wares on Suffolk Street. So if someone directs you using the Molly Malone statue as a reference point, you’ll know what street to look for. But you also need to know its other names, any one of which may be used by a Dubliner. They are: 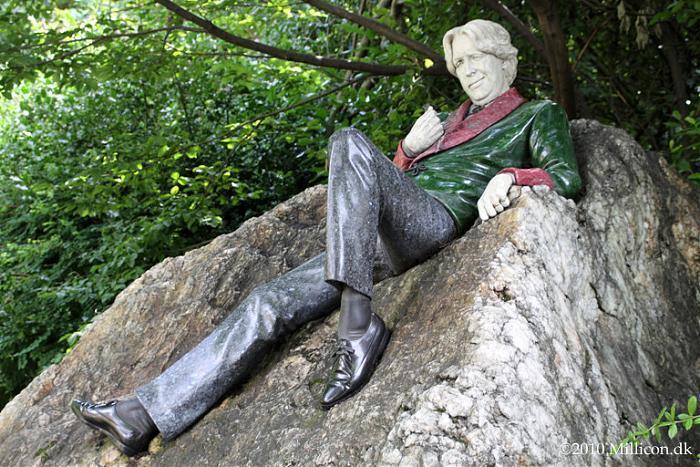 Be aware; some Dubliners don’t observe conventions of politically correct speech when nicknaming their statues. Hence, the one of Oscar Wilde, in Merrion Square Park, is alternatively known as: 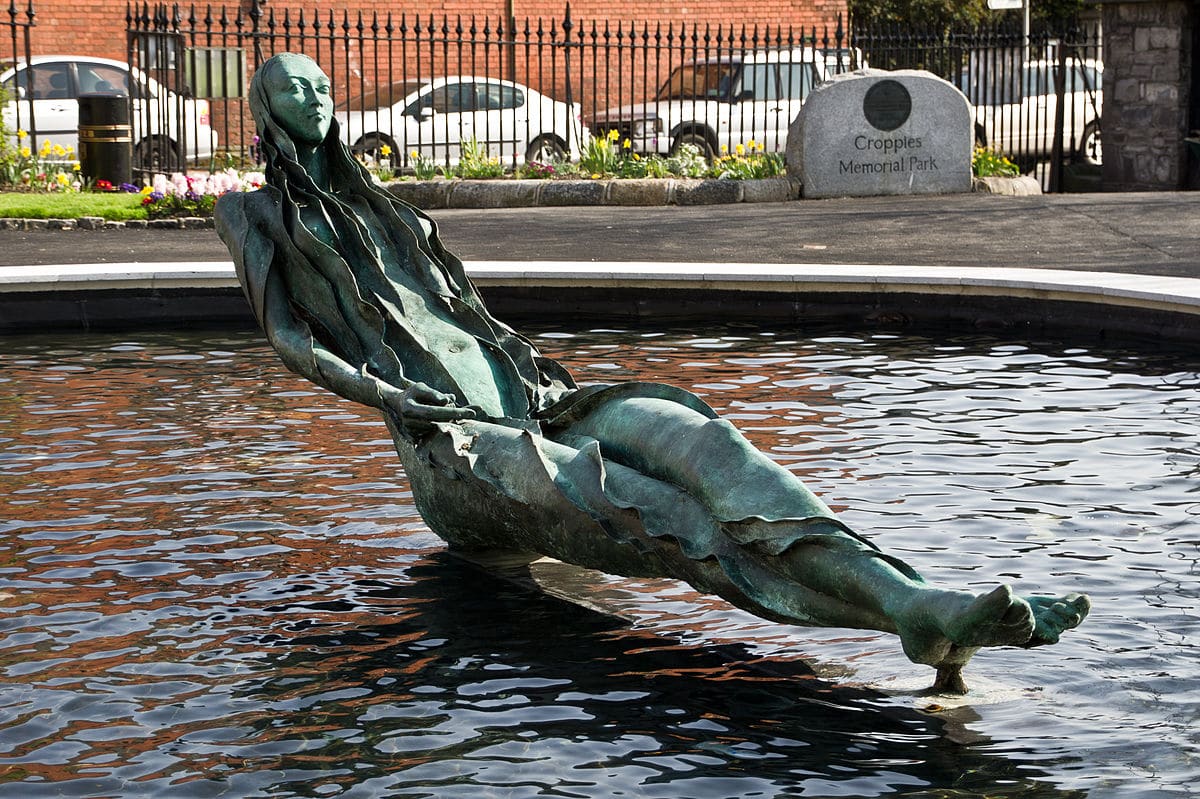 The third famous statue in Dublin, Anna Livia in honour of the River Liffey, has also been moved from its original site in O’Connell Street to Croppies Memorial Park, Wolfe Tone Quay. And it’s names are also not very politically correct. They are:

The floozie in the jacuzzi
The hoor in the sewer 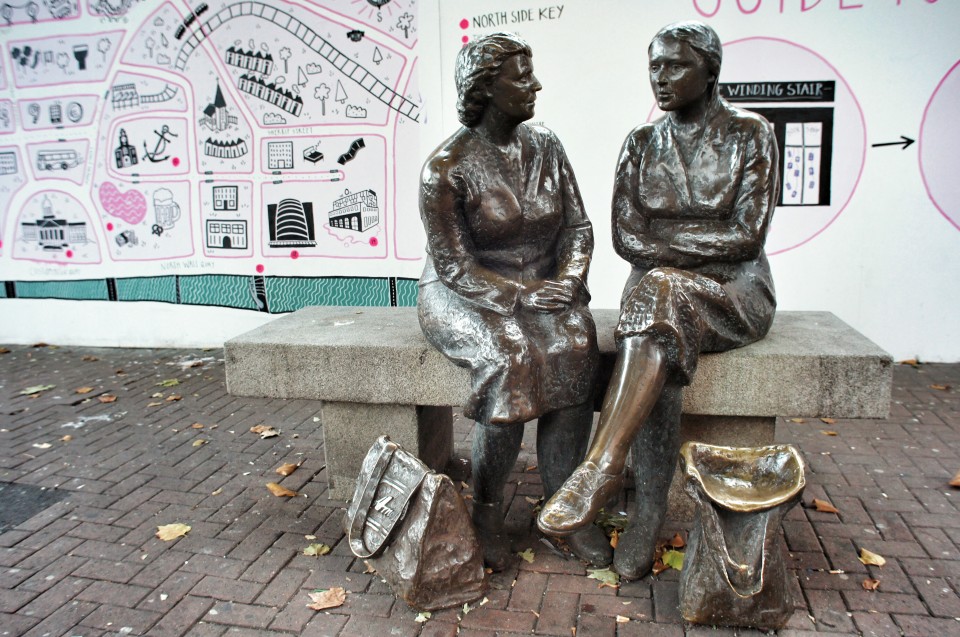 It’s hard to find a reason for a bronze statue of two ladies with their weekly shop. But, in Dublin, anything for a bit of public statuary. And anything for a rude name for it as well. So the Two Women on Lower Liffey Street are known as “the hags with the bags.” 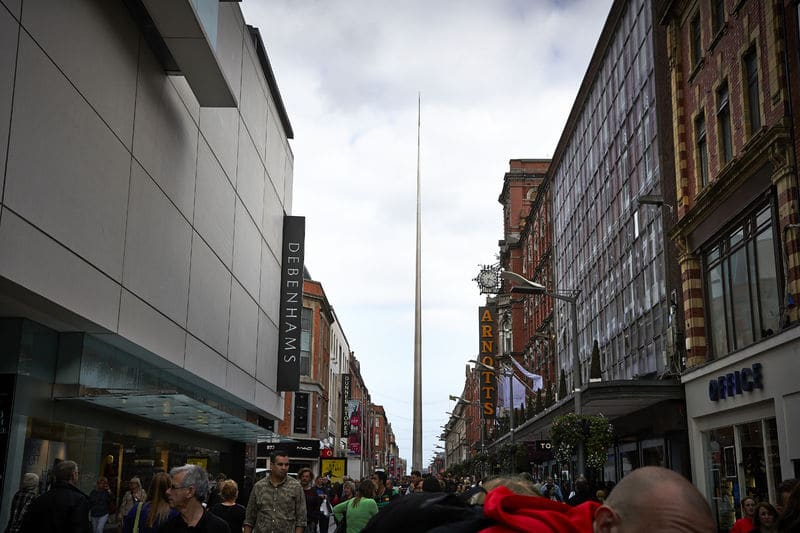 Of far greater impact is the terrestrial sculpture reaching toward the celestial, the Spire of Dublin in O’Connell Street. Plain and modern, unlike most other Dublin public sculptures, it naturally has nicknames, not all of them clean and pristine like its sainted self. Among them are:

The stiletto in the ghetto
The syringe in the binge
The nail in the pale
The pin in the bin
The spire in the mire
The pole in the hole
The rod to god, and, of course,
The metal mickey (mickey being slang for penis) 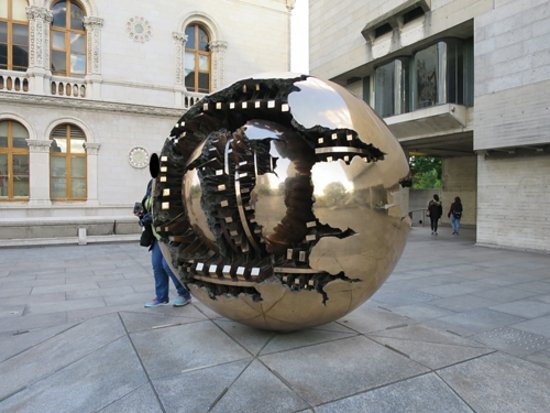 In much the same streamlined vein as the spire is a modern statue at Trinity College officially known as Sphere within Sphere. It’s other names? The half-eaten Malteser and The Death Star. 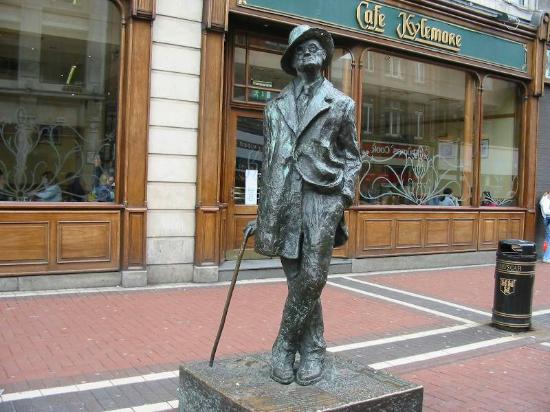 Returning to a more typically Irish and lyrical sort of statue, number 7 is that of iconic author James Joyce, located on North Earl Street. The uncommon author’s statue is commonly known as ‘The prick with the stick’ or ‘The prat with the hat’. 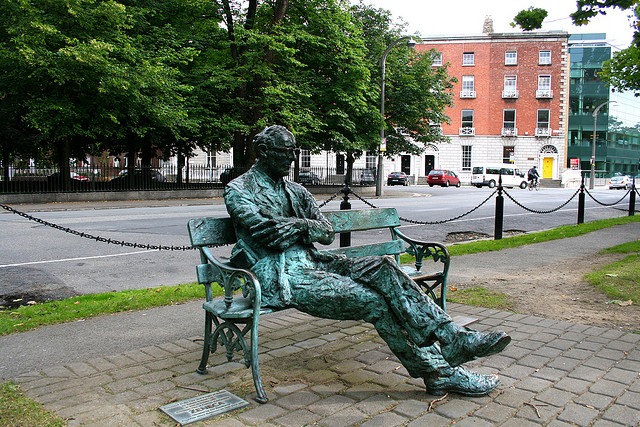 Another Irish author, Patrick Kavanagh, boasts a likeness on the Grand Canal. His likeness is known as either ‘The crank on the bank’ or ‘Banal at the canal’, apparently a critical comment on his writing. The first nickname alludes to his personality, one supposes. Dubliners should know. 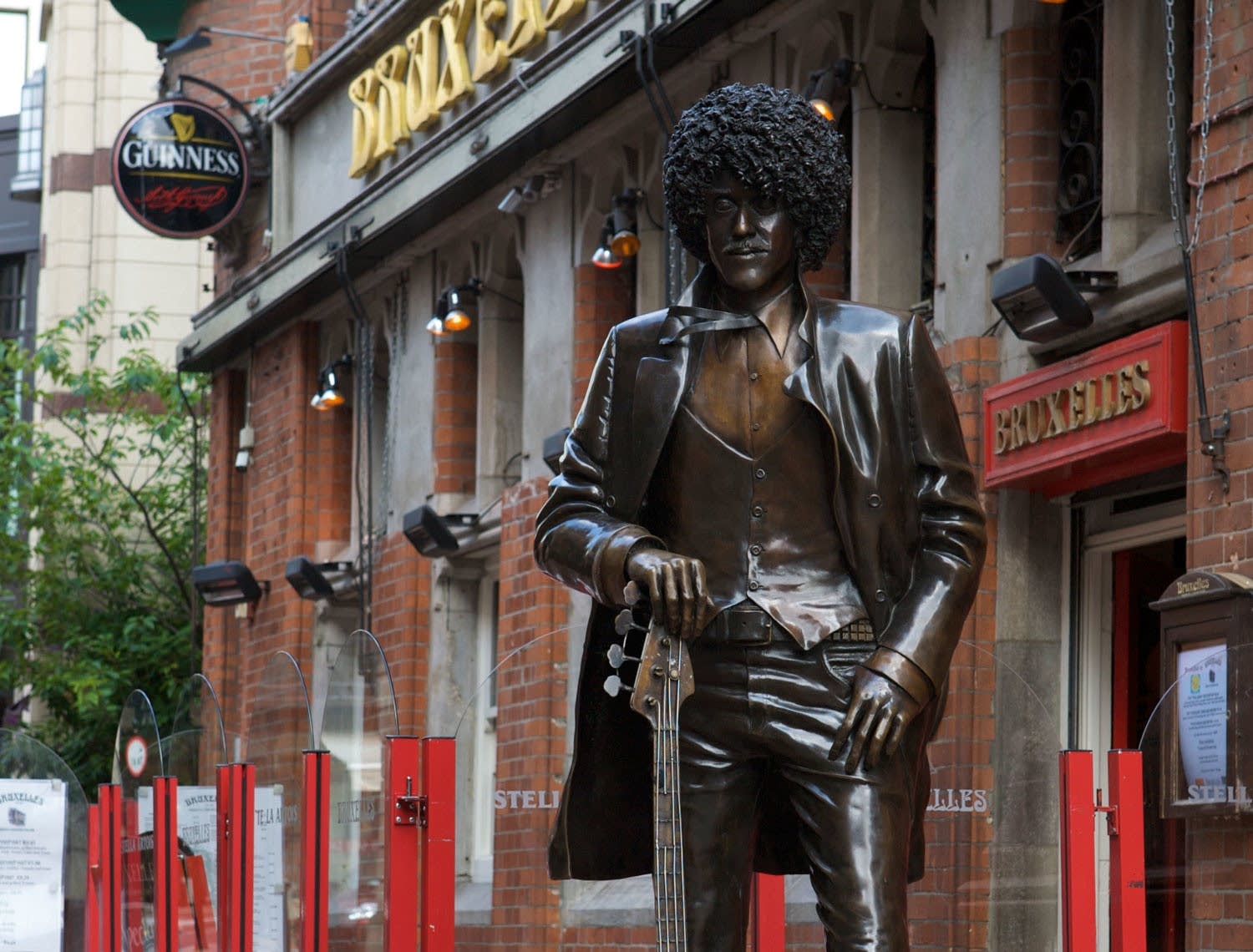 Phil Lynott, the rocker who was a founder of Thin Lizzie, has also been memorialised in Dublin with a statue on Harry Street. He has so far only garnered a single nickname ‘The ace with the bass’. 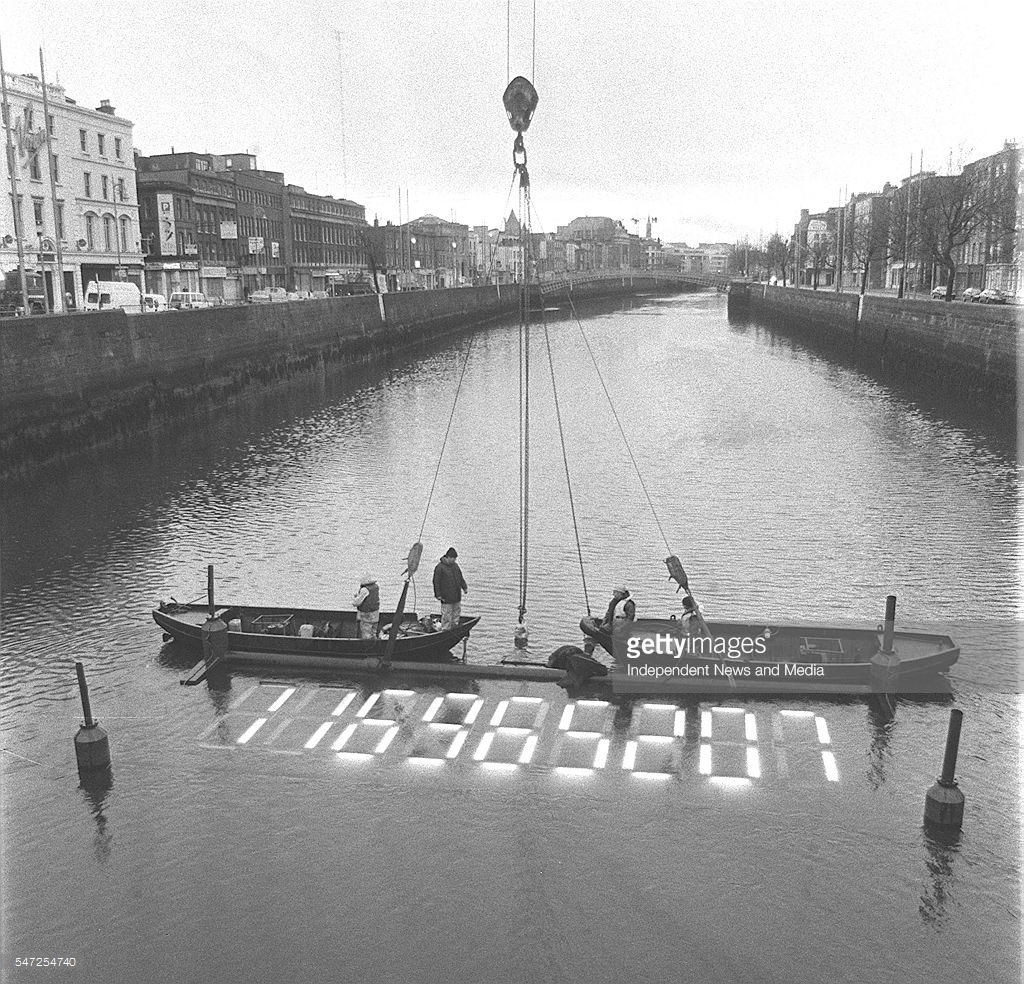 The final nicknamed statue in Dublin isn’t actually there anymore. Perhaps it was silly to commemorate the run-up to Y2K, as the entire brouhaha amounted to nothing, and the panic disappeared as soon as it began. No wonder the Dublin statue to it, The Millennium Clock on the banks of the Liffey, was sensibly pulled down. Oddly enough, though, it was removed in 1999, before the needless countdown to a non-disaster reached its zenith. Whether or not Dubliners knew their politicians had decided to memorialise a non-event, one thing is certain; Dubliners memorialised the hod full of nothing that was Y2K with a long-lasting nickname, ‘The chime in the slime’.